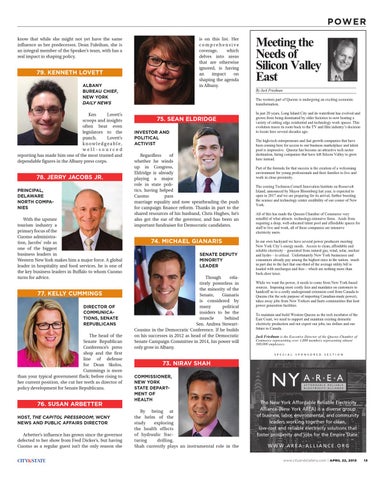 P OW E R know that while she might not yet have the same influence as her predecessor, Dean Fuleihan, she is an integral member of the Speaker’s team, with has a real impact in shaping policy.

is on this list. Her comprehensive coverage, which delves into areas that are otherwise ignored, is having an impact on shaping the agenda in Albany.

79. KENNETH LOVETT ALBANY BUREAU CHIEF, NEW YORK DAILY NEWS Ken Lovett’s scoops and insights often beat even legislators to the punch. Lovett’s knowledgeable, well-sourced reporting has made him one of the most trusted and dependable figures in the Albany press corps.

78. JERRY JACOBS JR. PRINCIPAL, DELAWARE NORTH COMPANIES With the upstate tourism industry a primary focus of the Cuomo administration, Jacobs’ role as one of the biggest business leaders in Western New York makes him a major force. A global leader in hospitality and food services, he is one of the key business leaders in Buffalo to whom Cuomo turns for advice.

77. KELLY CUMMINGS DIRECTOR OF COMMUNICATIONS, SENATE REPUBLICANS The head of the Senate Republican Conference’s press shop and the first line of defense for Dean Skelos, Cummings is more than your typical government flack; before rising to her current position, she cut her teeth as director of policy development for Senate Republicans.

76. SUSAN ARBETTER HOST, THE CAPITOL PRESSROOM; WCNY NEWS AND PUBLIC AFFAIRS DIRECTOR Arbetter’s influence has grown since the governor defected to her show from Fred Dicker’s, but having Cuomo as a regular guest isn’t the only reason she

Meeting the Needs of Silicon Valley East By Jack Friedman The western part of Queens is undergoing an exciting economic transformation.

75. SEAN ELDRIDGE INVESTOR AND POLITICAL ACTIVIST Regardless of whether he winds up in Congress, Eldridge is already playing a major role in state politics, having helped Cuomo pass marriage equality and now spearheading the push for campaign finance reform. Thanks in part to the shared resources of his husband, Chris Hughes, he’s also got the ear of the governor, and has been an important fundraiser for Democratic candidates.

74. MICHAEL GIANARIS SENATE DEPUTY MINORITY LEADER Though relatively powerless in the minority of the Senate, Gianaris is considered by many political insiders to be the muscle behind Sen. Andrea StewartCousins in the Democratic Conference. If he builds on his successes in 2012 as head of the Democratic Senate Campaign Committee in 2014, his power will only grow in Albany.

In just 20 years, Long Island City and its waterfront has evolved and grown from being dominated by older factories to now hosting a variety of cutting edge residential and technology work spaces. This evolution traces its roots back to the TV and film industry’s decision to locate here several decades ago. The high-tech entrepreneurs and fast growth companies that have been coming here for access to our business marketplace and talent pool is impressive. Queens has become an attractive tech sector destination, luring companies that have left Silicon Valley to grow here instead. Part of the formula for that success is the creation of a welcoming environment for young professionals and their families to live and work in close proximity. The coming Technion-Cornell Innovation Institute on Roosevelt Island, announced by Mayor Bloomberg last year, is expected to open in 2017 and we are preparing for its arrival, further boosting the science and technology center credibility of our corner of New York. All of this has made the Queens Chamber of Commerce very mindful of what attracts technology-intensive firms. Aside from requiring a deep, well-educated talent pool and affordable spaces for staff to live and work, all of these companies are intensive electricity users. In our own backyard we have several power producers meeting New York City’s energy needs. Access to clean, affordable and reliable electricity – generated from natural gas, wind, solar, nuclear and hydro – is critical. Unfortunately New York businesses and consumers already pay among the highest rates in the nation, much in part due to the fact that one-third of the average utility bill is loaded with surcharges and fees – which are nothing more than back-door taxes. While we want the power, it needs to come from New York-based sources. Imposing more costly fees and mandates on customers to handcuff us to a costly underground extension cord from Canada to Queens (for the sole purpose of importing Canadian-made power), takes away jobs from New Yorkers and hurts communities that host power generation facilities. To maintain and build Western Queens as the tech incubator of the East Coast, we need to support and maintain existing domestic electricity production and not export our jobs, tax dollars and our future to Canada. Jack Friedman is the Executive Director of the Queens Chamber of Commerce representing over 1,000 members representing almost 500,000 employees. S P E C I A L

73. NIRAV SHAH COMMISSIONER, NEW YORK STATE DEPARTMENT OF HEALTH By being at the helm of the study exploring the health effects of hydraulic fracturing drilling, Shah currently plays an instrumental role in the

A listing of the 100 most powerful people in Albany, New York. Also featuring a special issue spotlight on New York's Environment; A Q&A w/ Alexandra Pelosi; and more! 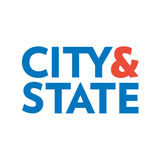