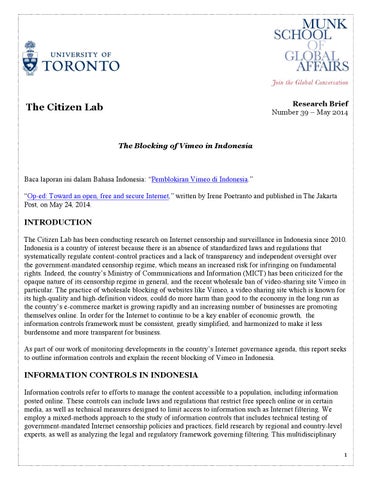 Baca laporan ini dalam Bahasa Indonesia: “Pemblokiran Vimeo di Indonesia.” “Op-ed: Toward an open, free and secure Internet,” written by Irene Poetranto and published in The Jakarta Post, on May 24, 2014.

INTRODUCTION The Citizen Lab has been conducting research on Internet censorship and surveillance in Indonesia since 2010. Indonesia is a country of interest because there is an absence of standardized laws and regulations that systematically regulate content-control practices and a lack of transparency and independent oversight over the government-mandated censorship regime, which means an increased risk for infringing on fundamental rights. Indeed, the country’s Ministry of Communications and Information (MICT) has been criticized for the opaque nature of its censorship regime in general, and the recent wholesale ban of video-sharing site Vimeo in particular. The practice of wholesale blocking of websites like Vimeo, a video sharing site which is known for its high-quality and high-definition videos, could do more harm than good to the economy in the long run as the country’s e-commerce market is growing rapidly and an increasing number of businesses are promoting themselves online. In order for the Internet to continue to be a key enabler of economic growth, the information controls framework must be consistent, greatly simplified, and harmonized to make it less burdensome and more transparent for business. As part of our work of monitoring developments in the country’s Internet governance agenda, this report seeks to outline information controls and explain the recent blocking of Vimeo in Indonesia.

INFORMATION CONTROLS IN INDONESIA Information controls refer to efforts to manage the content accessible to a population, including information posted online. These controls can include laws and regulations that restrict free speech online or in certain media, as well as technical measures designed to limit access to information such as Internet filtering. We employ a mixed-methods approach to the study of information controls that includes technical testing of government-mandated Internet censorship policies and practices, field research by regional and country-level experts, as well as analyzing the legal and regulatory framework governing filtering. This multidisciplinary 1 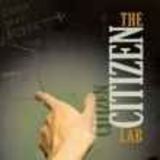