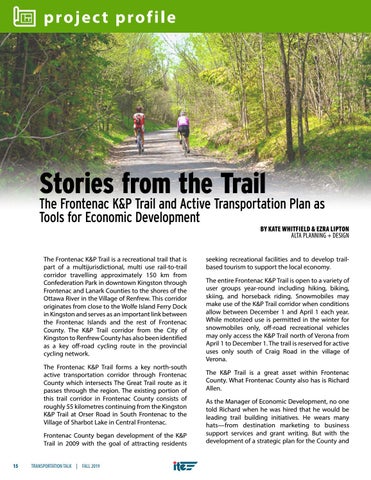 Stories from the Trail

The Frontenac K&P Trail is a recreational trail that is part of a multijurisdictional, multi use rail-to-trail corridor travelling approximately 150 km from Confederation Park in downtown Kingston through Frontenac and Lanark Counties to the shores of the Ottawa River in the Village of Renfrew. This corridor originates from close to the Wolfe Island Ferry Dock in Kingston and serves as an important link between the Frontenac Islands and the rest of Frontenac County. The K&P Trail corridor from the City of Kingston to Renfrew County has also been identified as a key off-road cycling route in the provincial cycling network. The Frontenac K&P Trail forms a key north-south active transportation corridor through Frontenac County which intersects The Great Trail route as it passes through the region. The existing portion of this trail corridor in Frontenac County consists of roughly 55 kilometres continuing from the Kingston K&P Trail at Orser Road in South Frontenac to the Village of Sharbot Lake in Central Frontenac. Frontenac County began development of the K&P Trail in 2009 with the goal of attracting residents 15

seeking recreational facilities and to develop trailbased tourism to support the local economy. The entire Frontenac K&P Trail is open to a variety of user groups year-round including hiking, biking, skiing, and horseback riding. Snowmobiles may make use of the K&P Trail corridor when conditions allow between December 1 and April 1 each year. While motorized use is permitted in the winter for snowmobiles only, off-road recreational vehicles may only access the K&P Trail north of Verona from April 1 to December 1. The trail is reserved for active uses only south of Craig Road in the village of Verona. The K&P Trail is a great asset within Frontenac County. What Frontenac County also has is Richard Allen. As the Manager of Economic Development, no one told Richard when he was hired that he would be leading trail building initiatives. He wears many hatsâ&#x20AC;&#x201D;from destination marketing to business support services and grant writing. But with the development of a strategic plan for the County and