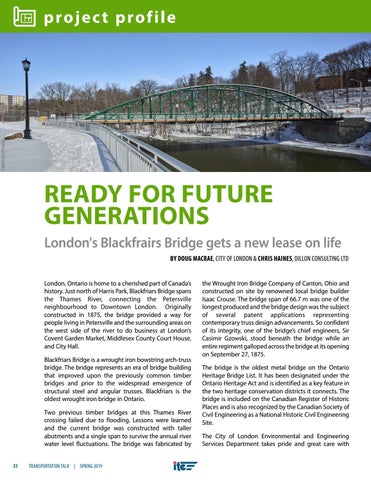 READY FOR FUTURE GENERATIONS London's Blackfrairs Bridge gets a new lease on life BY DOUG MACRAE, CITY OF LONDON & CHRIS HAINES, DILLON CONSULTING LTD London, Ontario is home to a cherished part of Canada’s history. Just north of Harris Park, Blackfriars Bridge spans the Thames River, connecting the Petersville neighbourhood to Downtown London. Originally constructed in 1875, the bridge provided a way for people living in Petersville and the surrounding areas on the west side of the river to do business at London’s Covent Garden Market, Middlesex County Court House, and City Hall. Blackfriars Bridge is a wrought iron bowstring arch-truss bridge. The bridge represents an era of bridge building that improved upon the previously common timber bridges and prior to the widespread emergence of structural steel and angular trusses. Blackfriars is the oldest wrought iron bridge in Ontario. Two previous timber bridges at this Thames River crossing failed due to flooding. Lessons were learned and the current bridge was constructed with taller abutments and a single span to survive the annual river water level fluctuations. The bridge was fabricated by 31

the Wrought Iron Bridge Company of Canton, Ohio and constructed on site by renowned local bridge builder Isaac Crouse. The bridge span of 66.7 m was one of the longest produced and the bridge design was the subject of several patent applications representing contemporary truss design advancements. So confident of its integrity, one of the bridge’s chief engineers, Sir Casimir Gzowski, stood beneath the bridge while an entire regiment galloped across the bridge at its opening on September 27, 1875. The bridge is the oldest metal bridge on the Ontario Heritage Bridge List. It has been designated under the Ontario Heritage Act and is identified as a key feature in the two heritage conservation districts it connects. The bridge is included on the Canadian Register of Historic Places and is also recognized by the Canadian Society of Civil Engineering as a National Historic Civil Engineering Site. The City of London Environmental and Engineering Services Department takes pride and great care with