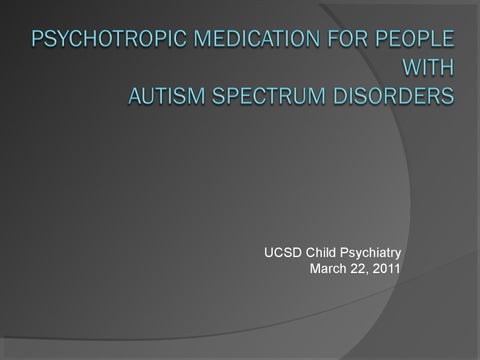 DIR in a nutshell Developmental levels – from regulation, to warm trust, and then a flow of enriching interactions  Individual Differences – sensory, motor, communication, visual-spatial, cognitive, etc.  Relationship Based – all about connecting, and making time with others for support and help 

1989 Magda Campbell: haloperidol helps social learning; others: methylphenidate causes side effects without benefit. 1990’s - 2006: treating target symptoms, based on responses in other conditions to medications; lots of use of neuroleptics for aggression, etc. 2004 Black Box warning for SSRIs in kids 2006 – Risperdal Early 2009 – Celexa ‘not working’ for OCD in ASD Late 2009 – Abilify Cochrane 2010 – SSRI’s not so good?

INFORMED CONSENT IS A PROCESS

Find a doctor you like and can work with Keep the doctor in the loop – doctor must have data Don’t overwhelm the doctor with data Doctors can be confused with terms like “biomedical” Respectfully offer resources – don’t expect your doctor to read a book for you, but do expect your doctor is interested in other opinions from other doctors

What do we want for our children? The usual wish: a meaningful life (socially, emotionally, maybe cognitively)

Requires a plan, and medication alone is not a plan.

Are you trying to improve an appropriate situation or make up for a bad one?

Will they change my child’s brain and fix it?  Could they injure my child?  What should I expect? 

To avoid ‘losing time’ while pulling the program together  To ‘do as much as possible’  Awakenings – are we trying for a miracle? 

medication probably does not treat core symptoms, but might make some target symptoms or co-occurring conditions better, creating more affective availability so that we can make progress, if you can avoid significant side effects.

Anti-Epileptic Drugs (aka anti-seizure medications) So many and all so different in character For seizures, and for mood stabilization Bimodal seizure risk in ASDs ‘Subclinical Seizures’ – 24 hr EEGs Might help other medications work better (stimulants, antidepressants) Combined pharmacology vs. polypharmacy Sudden stopping might make seizures more likely

Keppra (levetiricetum) – easy to use, but does it work? Lamictal (lamotragine) – mood stability, ?better mood. Must go slow, and watch for rash Topamax (topiramate) – adjunct, may cause weight loss, loss of expressive language, usually need to go slow. Neurontin (gabapentin) – Does it work at all? Does it harm at all? Does help pain syndromes. Lyrica (pregabalin) – for pain in fibromyalgia, partial seizures Zarontin (ethosuccimide) – for partial/ absence seizures; liver issues

And the latest ideas:  

Oxytocin? Social connectedness in praries voles and mice, now tried in ASDs Medical marijuana? Can lead to poorer memory with hippocampal cell loss, poor initiative/ motivation, impaired motor control, and psychosis Any open label trial is likely to have some responders and lead to a new stream of people trying it out.