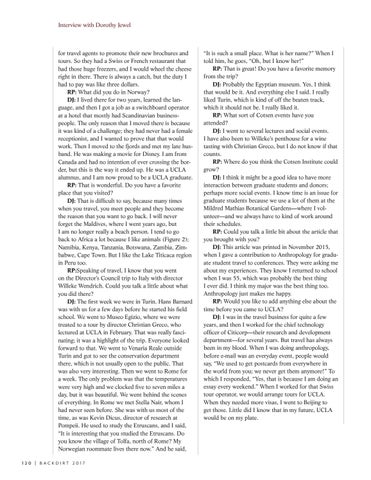 for travel agents to promote their new brochures and tours. So they had a Swiss or French restaurant that had those huge freezers, and I would wheel the cheese right in there. There is always a catch, but the duty I had to pay was like three dollars. RP: What did you do in Norway? DJ: I lived there for two years, learned the language, and then I got a job as a switchboard operator at a hotel that mostly had Scandinavian businesspeople. The only reason that I moved there is because it was kind of a challenge; they had never had a female receptionist, and I wanted to prove that that would work. Then I moved to the fjords and met my late husband. He was making a movie for Disney. I am from Canada and had no intention of ever crossing the border, but this is the way it ended up. He was a UCLA alumnus, and I am now proud to be a UCLA graduate. RP: That is wonderful. Do you have a favorite place that you visited? DJ: That is difficult to say, because many times when you travel, you meet people and they become the reason that you want to go back. I will never forget the Maldives, where I went years ago, but I am no longer really a beach person. I tend to go back to Africa a lot because I like animals (Figure 2); Namibia, Kenya, Tanzania, Botswana, Zambia, Zimbabwe, Cape Town. But I like the Lake Titicaca region in Peru too. RP:Speaking of travel, I know that you went on the Director’s Council trip to Italy with director Willeke Wendrich. Could you talk a little about what you did there? DJ: The first week we were in Turin. Hans Barnard was with us for a few days before he started his field school. We went to Museo Egizio, where we were treated to a tour by director Christian Greco, who lectured at UCLA in February. That was really fascinating; it was a highlight of the trip. Everyone looked forward to that. We went to Venaria Reale outside Turin and got to see the conservation department there, which is not usually open to the public. That was also very interesting. Then we went to Rome for a week. The only problem was that the temperatures were very high and we clocked five to seven miles a day, but it was beautiful. We went behind the scenes of everything. In Rome we met Stella Nair, whom I had never seen before. She was with us most of the time, as was Kevin Dicus, director of research at Pompeii. He used to study the Etruscans, and I said, “It is interesting that you studied the Etruscans. Do you know the village of Tolfa, north of Rome? My Norwegian roommate lives there now.” And he said, 120 | BACKDIRT 2017

“It is such a small place. What is her name?” When I told him, he goes, “Oh, but I know her!” RP: That is great! Do you have a favorite memory from the trip? DJ: Probably the Egyptian museum. Yes, I think that would be it. And everything else I said. I really liked Turin, which is kind of off the beaten track, which it should not be. I really liked it. RP: What sort of Cotsen events have you attended? DJ: I went to several lectures and social events. I have also been to Willeke’s penthouse for a wine tasting with Christian Greco, but I do not know if that counts. RP: Where do you think the Cotsen Institute could grow? DJ: I think it might be a good idea to have more interaction between graduate students and donors; perhaps more social events. I know time is an issue for graduate students because we use a lot of them at the Mildred Mathias Botanical Gardens—where I volunteer—and we always have to kind of work around their schedules. RP: Could you talk a little bit about the article that you brought with you? DJ: This article was printed in November 2015, when I gave a contribution to Anthropology for graduate student travel to conferences. They were asking me about my experiences. They know I returned to school when I was 55, which was probably the best thing I ever did. I think my major was the best thing too. Anthropology just makes me happy. RP: Would you like to add anything else about the time before you came to UCLA? DJ: I was in the travel business for quite a few years, and then I worked for the chief technology officer of Citicorp—their research and development department—for several years. But travel has always been in my blood. When I was doing anthropology, before e-mail was an everyday event, people would say, “We used to get postcards from everywhere in the world from you; we never get them anymore!” To which I responded, “Yes, that is because I am doing an essay every weekend.” When I worked for that Swiss tour operator, we would arrange tours for UCLA. When they needed more visas, I went to Beijing to get those. Little did I know that in my future, UCLA would be on my plate.

This issue of Backdirt, the CIoA Annual Review, includes articles on The Dragon Stones of Armenia, Museology and Egyptian Material Culture, A Day in the Life of a Rural Indian Cowherd, and many more. 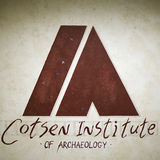