Chapter R of the Encyclopedia of Northern Kentucky 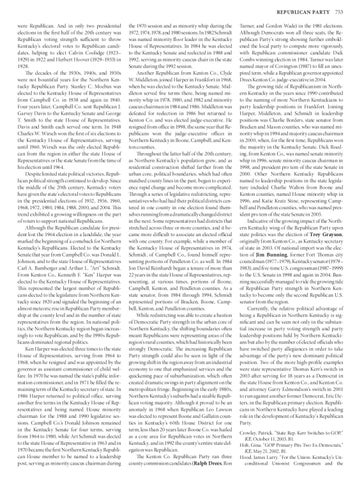 the 1970 session and as minority whip during the 1972, 1974, 1978, and 1980 sessions. In 1982 Schmidt was named minority floor leader in the Kentucky House of Representatives. In 1984 he was elected to the Kentucky Senate and reelected in 1988 and 1992, serving as minority caucus chair in the state Senate during the 1992 session. Another Republican from Kenton Co., Clyde W. Middleton, joined Harper in Frankfort in 1968, when he was elected to the Kentucky Senate. Middleton served five terms there, being named minority whip in 1978, 1980, and 1982 and minority caucus chairman in 1984 and 1986. Middleton was defeated for reelection in 1986 but returned to Kenton Co. and was elected judge-executive. He resigned from office in 1998, the same year that Republicans won the judge-executive offices in Northern Kentucky in Boone, Campbell, and Kenton counties. Throughout the latter half of the 20th century, as Northern Kentucky’s population grew, and as residential construction shifted farther from the urban core, political boundaries, which had often matched county lines in the past, began to experience rapid change and become more complicated. Through a series of legislative redistricting, representatives who had had their political districts centered in one county in one election found themselves running from a dramatically changed district in the next. Some representatives had districts that stretched across three or more counties, and it became more difficult to associate an elected official with one county. For example, while a member of the Kentucky House of Representatives in 1974, Schmidt, of Campbell Co., found himself representing portions of Pendleton Co. as well. In 1984 Jon David Reinhardt began a tenure of more than 22 years in the state House of Representatives, representing, at various times, portions of Boone, Campbell, Kenton, and Pendleton counties. As a state senator, from 1984 through 1994, Schmidt represented portions of Bracken, Boone, Campbell, Kenton, and Pendleton counties. While redistricting was able to create a bastion of Democratic Party strength in the urban core of Northern Kentucky, the shifting boundaries often meant Republicans were representing areas of the region’s rural counties, which had historically been strongly Democratic. The increasing Republican Party strength could also be seen in light of the growing shift in the region away from an industrial economy to one that emphasized ser vices and the quickening pace of suburbanization, which often created dramatic swings in party alignment on the metropolitan fringe. Beginning in the early 1980s, Northern Kentucky’s suburbs had a sizable Republican voting majority. Although it proved to be an anomaly in 1968 when Republican Leo Lawson was elected to represent Boone and Gallatin counties in Kentucky’s 60th House District for one term, less than 20 years later Boone Co. was hailed as a core area for Republican votes in Northern Kentucky, and in 1992 the county’s entire state delegation was Republican. The Kenton Co. Republican Party ran three county commission candidates (Ralph Drees, Ron

Turner, and Gordon Wade) in the 1981 elections. Although Democrats won all three seats, the Republican Party’s strong showing further emboldened the local party to compete more vigorously, with Republican commissioner candidate Dick Combs winning election in 1984. Turner was later named mayor of Covington (1987) to fill an unexpired term, while a Republican governor appointed Drees Kenton Co. judge-executive in 2004. The growing tide of Republicanism in Northern Kentucky in the years since 1990 contributed to the naming of more Northern Kentuckians to party leadership positions in Frankfort. Joining Harper, Middleton, and Schmidt in leadership positions was Charlie Borders, state senator from Bracken and Mason counties, who was named minority whip in 1994 and majority caucus chairman in 2000, when, for the first time, Republicans won the majority in the Kentucky Senate. Dick Roeding, from Kenton Co., was named senate minority whip in 1996, senate minority caucus chairman in 1998, and president pro tem of the state Senate in 2000. Other Northern Kentucky Republicans named to leadership positions in the state legislature included Charlie Walton from Boone and Kenton counties, named House minority whip in 1996, and Katie Kratz Stine, representing Campbell and Pendleton counties, who was named president pro tem of the state Senate in 2005. Indicative of the growing impact of the Northern Kentucky wing of the Republican Party upon state politics was the election of Trey Grayson, originally from Kenton Co., as Kentucky secretary of state in 2003. Of national import was the election of Jim Bunning, former Fort Thomas city councilman (1977–1979), Kentucky senator (1979– 1983), and five-time U.S. congressman (1987–1999) to the U.S. Senate in 1998 and again in 2004. Bunning successfully managed to ride the growing tide of Republican Party strength in Northern Kentucky to become only the second Republican U.S. senator from the region. Currently, the relative political advantage of being a Republican in Northern Kentucky is significant and can be seen not only in the substantial increase in party voting strength and party leadership positions held by Northern Kentuckians but also by the number of elected officials who have switched party allegiances in order to take advantage of the party’s new dominant political position. Two of the more high-profi le examples were state representative Thomas Kerr’s switch in 2003 after serving for 18 years as a Democrat in the state House from Kenton Co., and Kenton Co. and attorney Garry Edmondson’s switch in 2001 to run against another former Democrat, Eric Deters, in the Republican primary election. Republicans in Northern Kentucky have played a leading role in the development of Kentucky’s Republican Party. Crowley, Patrick. “State Rep. Kerr Switches to GOP,” KE, October 11, 2003, B1. Holt, Gina. “GOP Primary Pits Two Ex-Democrats,” KE, May 21, 2002, B1. Hood, James Larry. “For the Union: Kentucky’s Unconditional Unionist Congressmen and the

Chapter R of the Encyclopedia of Northern Kentucky

The Encylopedia of Northern Kentucky in partnership with NKY.com. Edited by Paul A. Tenkotte and James C. Claypool, The University Press of Kentucky. Republished for the World Wide Web by NKY.com and Enquirer Media. A Project of the Thomas D. Clark Foundation, Inc. 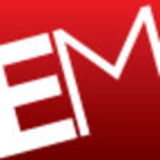