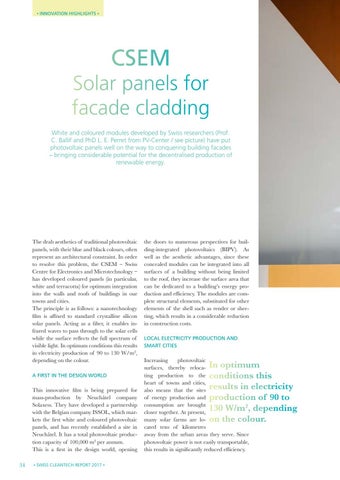 The drab aesthetics of traditional photovoltaic panels, with their blue and black colours, often represent an architectural constraint. In order to resolve this problem, the CSEM – Swiss Centre for Electronics and Microtechnology – has developed coloured panels (in particular, white and terracotta) for optimum integration into the walls and roofs of buildings in our towns and cities. The principle is as follows: a nanotechnology film is affixed to standard crystalline silicon solar panels. Acting as a filter, it enables infrared waves to pass through to the solar cells while the surface reflects the full spectrum of visible light. In optimum conditions this results in electricity production of 90 to 130 W/m2, depending on the colour. A FIRST IN THE DESIGN WORLD

This innovative film is being prepared for mass-production by Neuchâtel company Solaxess. They have developed a partnership with the Belgian company ISSOL, which markets the first white and coloured photovoltaic panels, and has recently established a site in Neuchâtel. It has a total photovoltaic production capacity of 100,000 m2 per annum. This is a first in the design world, opening 34

the doors to numerous perspectives for building-integrated photovoltaics (BIPV). As well as the aesthetic advantages, since these concealed modules can be integrated into all surfaces of a building without being limited to the roof, they increase the surface area that can be dedicated to a building’s energy production and efficiency. The modules are complete structural elements, substituted for other elements of the shell such as render or sheeting, which results in a considerable reduction in construction costs. LOCAL ELECTRICITY PRODUCTION AND SMART CITIES

Increasing photovoltaic surfaces, thereby relocating production to the heart of towns and cities, also means that the sites of energy production and consumption are brought 2 closer together. At present, many solar farms are located tens of kilometres away from the urban areas they serve. Since photovoltaic power is not easily transportable, this results in significantly reduced efficiency.

In optimum conditions this results in electricity production of 90 to 130 W/m , depending on the colour. 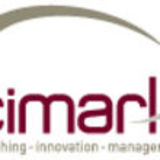