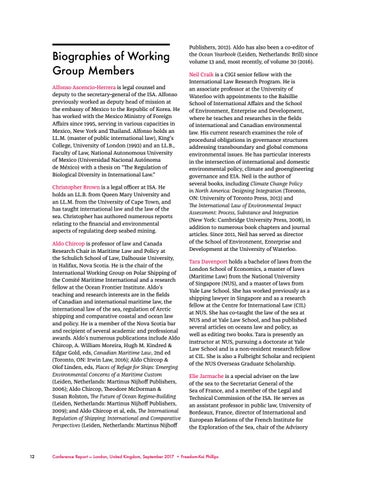 Biographies of Working Group Members Alfonso Ascencio-Herrera is legal counsel and deputy to the secretary-general of the ISA. Alfonso previously worked as deputy head of mission at the embassy of Mexico to the Republic of Korea. He has worked with the Mexico Ministry of Foreign Affairs since 1995, serving in various capacities in Mexico, New York and Thailand. Alfonso holds an LL.M. (master of public international law), King’s College, University of London (1993) and an LL.B., Faculty of Law, National Autonomous University of Mexico (Universidad Nacional Autónoma de México) with a thesis on “The Regulation of Biological Diversity in International Law.” Christopher Brown is a legal officer at ISA. He holds an LL.B. from Queen Mary University and an LL.M. from the University of Cape Town, and has taught international law and the law of the sea. Christopher has authored numerous reports relating to the financial and environmental aspects of regulating deep seabed mining. Aldo Chircop is professor of law and Canada Research Chair in Maritime Law and Policy at the Schulich School of Law, Dalhousie University, in Halifax, Nova Scotia. He is the chair of the International Working Group on Polar Shipping of the Comité Maritime International and a research fellow at the Ocean Frontier Institute. Aldo’s teaching and research interests are in the fields of Canadian and international maritime law, the international law of the sea, regulation of Arctic shipping and comparative coastal and ocean law and policy. He is a member of the Nova Scotia bar and recipient of several academic and professional awards. Aldo’s numerous publications include Aldo Chircop, A. William Moreira, Hugh M. Kindred & Edgar Gold, eds, Canadian Maritime Law, 2nd ed (Toronto, ON: Irwin Law, 2016); Aldo Chircop & Olof Linden, eds, Places of Refuge for Ships: Emerging Environmental Concerns of a Maritime Custom (Leiden, Netherlands: Martinus Nijhoff Publishers, 2006); Aldo Chircop, Theodore McDorman & Susan Rolston, The Future of Ocean Regime-Building (Leiden, Netherlands: Martinus Nijhoff Publishers, 2009); and Aldo Chircop et al, eds, The International Regulation of Shipping: International and Comparative Perspectives (Leiden, Netherlands: Martinus Nijhoff

Publishers, 2012). Aldo has also been a co-editor of the Ocean Yearbook (Leiden, Netherlands: Brill) since volume 13 and, most recently, of volume 30 (2016). Neil Craik is a CIGI senior fellow with the International Law Research Program. He is an associate professor at the University of Waterloo with appointments to the Balsillie School of International Affairs and the School of Environment, Enterprise and Development, where he teaches and researches in the fields of international and Canadian environmental law. His current research examines the role of procedural obligations in governance structures addressing transboundary and global commons environmental issues. He has particular interests in the intersection of international and domestic environmental policy, climate and geoengineering governance and EIA. Neil is the author of several books, including Climate Change Policy in North America: Designing Integration (Toronto, ON: University of Toronto Press, 2013) and The International Law of Environmental Impact Assessment: Process, Substance and Integration (New York: Cambridge University Press, 2008), in addition to numerous book chapters and journal articles. Since 2011, Neil has served as director of the School of Environment, Enterprise and Development at the University of Waterloo. Tara Davenport holds a bachelor of laws from the London School of Economics, a master of laws (Maritime Law) from the National University of Singapore (NUS), and a master of laws from Yale Law School. She has worked previously as a shipping lawyer in Singapore and as a research fellow at the Centre for International Law (CIL) at NUS. She has co-taught the law of the sea at NUS and at Yale Law School, and has published several articles on oceans law and policy, as well as editing two books. Tara is presently an instructor at NUS, pursuing a doctorate at Yale Law School and is a non-resident research fellow at CIL. She is also a Fulbright Scholar and recipient of the NUS Overseas Graduate Scholarship. Elie Jarmache is a special adviser on the law of the sea to the Secretariat General of the Sea of France, and a member of the Legal and Technical Commission of the ISA. He serves as an assistant professor in public law, University of Bordeaux, France, director of International and European Relations of the French Institute for the Exploration of the Sea, chair of the Advisory 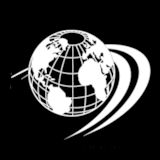 This research workshop was convened by the International Law Research Program of the Centre for International Governance Innovation, in conj...

This research workshop was convened by the International Law Research Program of the Centre for International Governance Innovation, in conj...