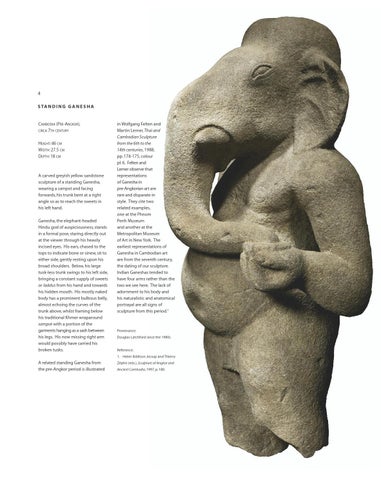 A carved greyish yellow sandstone sculpture of a standing Ganesha, wearing a sampot and facing forwards, his trunk bent at a right angle so as to reach the sweets in his left hand. Ganesha, the elephant-headed Hindu god of auspiciousness, stands in a formal pose, staring directly out at the viewer through his heavily incised eyes. His ears, chased to the tops to indicate bone or sinew, sit to either side, gently resting upon his broad shoulders. Below, his large tusk-less trunk swings to his left side, bringing a constant supply of sweets or laddus from his hand and towards his hidden mouth. His mostly naked body has a prominent bulbous belly, almost echoing the curves of the trunk above, whilst framing below his traditional Khmer wraparound sampot with a portion of the garments hanging as a sash between his legs. His now missing right arm would possibly have carried his broken tusks.

in Wolfgang Felten and Martin Lerner, Thai and Cambodian Sculpture from the 6th to the 14th centuries, 1988, pp. 174-175, colour pl. 6. Felten and Lerner observe that representations of Ganesha in pre-Angkorian art are rare and disparate in style. They cite two related examples, one at the Phnom Penh Museum and another at the Metropolitan Museum of Art in New York. The earliest representations of Ganesha in Cambodian art are from the seventh century, the dating of our sculpture. Indian Ganeshas tended to have four arms rather than the two we see here. The lack of adornment to his body and his naturalistic and anatomical portrayal are all signs of sculpture from this period.1

Provenance: Douglas Latchford since the 1980s

A related standing Ganesha from the pre-Angkor period is illustrated