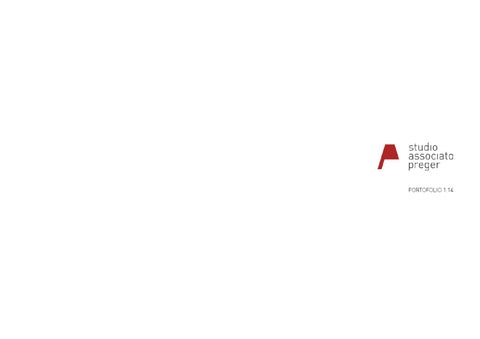 The old abandoned mental hospital close to the historic center is a tremendous opportunity for the city of Imola. The study proposes the restoration of the wide park and the nineteenth-century pavilions, including activities related to research, cultural and social services for the community. The project comprises also residential buildings and small commercial facilities.

This is one of the widest areas of the â&amp;#x20AC;&amp;#x153;Darsena projectâ&amp;#x20AC;?, the most important redevelopment program started in Ravenna in the 90s. In this area the new Municipal Urban Plan planned to insert the tallest building of the city, a sort of lighthouse that ends the two kilometers of new urban district, projected towards the harbor and the sea, and connected with the other side of the dock by a light footbridge. Three tall buildings precede the tower along the quay, and between them large green courtyards, with pedestrian streets and surrounded by buildings in a row of three to five floors, overlook the canal. The settlement is completed with commercial buildings and offices, creating well-articulated public spaces and a large square in front of the tower.

Urban plan for a multipurpose area

The area is located near the motorway exit of Cesena and faces the new Technogym headquarters. The production area is clearly separated from the office and commercial area, which is arranged around a wide park with winding walking and cycling routes. The green area also connects the residential area located in the south part of the lot.

On a site located in one of the major seaside resort of the Adriatic coast, in place of thirteen “Colonie” neglected for years, the project proposes a new urban design with the reconstitution of the beach and dunes, and the creation of an articulated network of green spaces, plazas and bicycle and pedestrian paths. Five modern hotels, new tourist residences and recreational and commercial facilities, will give new life to one of the major seaside resorts of the Adriatic.

The client wanted a sustainable project for this small complex of 34 apartments on the hills of Bertinoro. The shape of the buildings was determined considering the right relationship with the sun, the view towards the fortress of Bertinoro and the steep slope of the site. The houses, with only a few windows on the north and west sides, overlook the surrounding countryside towards south and east, with entrances and terraces on different levels to take advantage of the slope; solar panels are integrated into the roof and contribute to the overall energy balance.

Renovation of the hotel and spa in Fratta Terme Bertinoro (FC), Italy Client Innova Hotel Architectural Design Studio Associato Preger Year 2004-2007 Built area Sq.m 4.300 Cronology Completed The large thermal center, built in the 30s, was completely renovated to create a hotel with 65 rooms and a spa and wellness center. The monumental faรงade decorated with artificial travertine, the entrance and the main halls were restored, while the other interior spaces were adapted to the new requirements of functionality and comfort. The vast basement space, originally used for services, was completely transformed into a spa and wellness center, creating conditions of light and transparency from the new entrance to the park on the opposite side. The extention on the lower level houses the pool and the gym, providing also two large terraces accessible from the living room and from the restaurant on the first level.

The waterfront was completely restored with a new flooring and public lighting, the planting of new trees and the renovation of underground utilities. The roadway was narrowed to widen the sidewalks, creating a bike path and a limited number of parking spaces. The design of the pavement, although distinguishing the different functions, managed to give uniformity to the whole street. The project is completed by a small pedestrian square, enriched with a pool of water.

Taking advantage of the sloping site, the service area was arranged on two floors: pantry, loundery and storage at the lower level facing the driveway, kitchen and other spaces for staff upstairs at the same level of the classrooms. A spacious living room, facing a wide porch on the east, connects the services area with the three classrooms facing the garden towards south and protected by a cantilever roof in order to optimize the relationship with the sun.

The project site is located near the historic center, in a urban context with buildings aligned along the street but incoherent from an architectural point of view. The project completed the front on the main street, and arranged the new buildings in order to form, together with the existing building renovated, a Ushaped complex around a central courtyard.

The refurbishment of the long-term hospitalization ward allowed to reach higher standards in terms of sanitary service and dwelling comfort. The number of rooms was decreased in order to provide more space and light for each patient. A zinc-titanium cladding was used to distinguish the new extension from the existing parts.

The building features large windows on the south and east side towards the countryside and the river, in order to take advantage of the solar gain in the winter, protected by large balconies in the summer. The choice to build a high energy efficiency house led to pay great attention to the insulation of all parts of the building and also to the utility systems (ventilation, heat pump, the production of heat and electricity). The building is undergoing certification Casaclima in Class A.

The project site is located in a productive area of the city, undergoing conversion. Shops and offices on two or three floors were arranged facing the main streets. The residential part, four stories high, overlooks a courtyard with balconies facing towards east and south. A large underground parking provides both private and public parking spaces.

The project involves the construction of 6,000 new low cost houses. These one or two storey houses, arranged in different ways, are all single-family and provide separate entrances from the street. While respecting the cost limit (not exceeding $ 500 per square meter) the houses are comfortable, equipped with natural ventilation systems and respectful to the culture and customs of the Iraqi family. The blocks are characterized by different types of external decoration.

A space dedicated to weddings and parties, in one of the holiest cities in the Shia world. The project aims to bring together modern architecture and an exterior decoration that keeps the character of the local traditional architecture.

The overall project brings together, in a single settlement, several plants for the industrial production of building components. At the entrance of the site this building welcomes customers to show them products and architectural solutions for housing, as a showcase of Italian design and skills.

The new building includes several activities related to wellness and physical rehabilitation: a wellness center with swimming pool on the ground floor, a medical clinic on the first and second floors and a gym with sun terrace on the third floor. The spa is designed as a closed envelope enclosing a glass box projected towards the entrance plaza.

New hotel on former Mater Dei area Riccione (RN), Italy Client Serenissima SGR Architectural Design Studio Associato Preger Year 2013 Cronology Architectural Project The project site is located in one of the major seaside resorts on the Adriatic coast. The new hotel, with 200 rooms overlooking the sea, also includes a conference area, an external pool on the first floor and a rooftop spa. The project also includes the renovation of the waterfront facing the Hotel.

The project brings together the best Italian furniture companies in a single commercial facility, in order to provide the customers a great variety of items of the highest Italian design and quality at a lower price. The outlet mall will house up to 120 brands, all dedicated to furnishing, and will include also restaurants offering typical products of the Italian tradition, arranged around a &quot;food court&quot; on the upper level overlooking the vast internal court, and a design office to serve customers.

this volume is printed on FSC paper