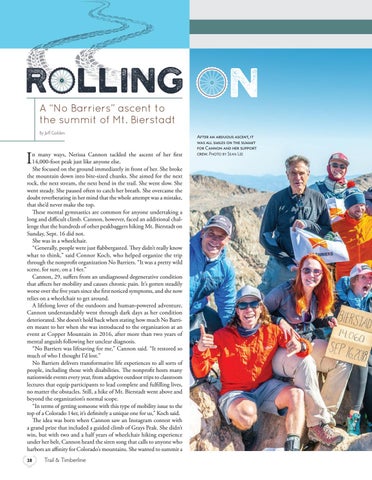 A “No Barriers” ascent to the summit of Mt. Bierstadt By Jeff Golden

n many ways, Nerissa Cannon tackled the ascent of her first 14,000-foot peak just like anyone else. She focused on the ground immediately in front of her. She broke the mountain down into bite-sized chunks. She aimed for the next rock, the next stream, the next bend in the trail. She went slow. She went steady. She paused often to catch her breath. She overcame the doubt reverberating in her mind that the whole attempt was a mistake, that she’d never make the top. These mental gymnastics are common for anyone undertaking a long and difficult climb. Cannon, however, faced an additional challenge that the hundreds of other peakbaggers hiking Mt. Bierstadt on Sunday, Sept. 16 did not. She was in a wheelchair. “Generally, people were just flabbergasted. They didn’t really know what to think,” said Connor Koch, who helped organize the trip through the nonprofit organization No Barriers. “It was a pretty wild scene, for sure, on a 14er.” Cannon, 29, suffers from an undiagnosed degenerative condition that affects her mobility and causes chronic pain. It’s gotten steadily worse over the five years since she first noticed symptoms, and she now relies on a wheelchair to get around. A lifelong lover of the outdoors and human-powered adventure, Cannon understandably went through dark days as her condition deteriorated. She doesn’t hold back when stating how much No Barriers meant to her when she was introduced to the organization at an event at Copper Mountain in 2016, after more than two years of mental anguish following her unclear diagnosis. “No Barriers was lifesaving for me,” Cannon said. “It restored so much of who I thought I’d lost.” No Barriers delivers transformative life experiences to all sorts of people, including those with disabilities. The nonprofit hosts many nationwide events every year, from adaptive outdoor trips to classroom lectures that equip participants to lead complete and fulfilling lives, no matter the obstacles. Still, a hike of Mt. Bierstadt went above and beyond the organization’s normal scope. “In terms of getting someone with this type of mobility issue to the top of a Colorado 14er, it’s definitely a unique one for us,” Koch said. The idea was born when Cannon saw an Instagram contest with a grand prize that included a guided climb of Grays Peak. She didn’t win, but with two and a half years of wheelchair hiking experience under her belt, Cannon heard the siren song that calls to anyone who harbors an affinity for Colorado’s mountains. She wanted to summit a 38

After an arduous ascent, it was all smiles on the summit for Cannon and her support crew. Photo by Sean Lee