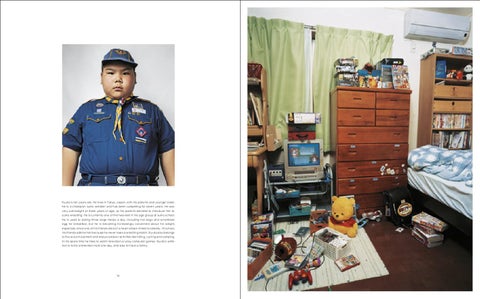 Ryuta is ten years old. He lives in Tokyo, Japan, with his parents and younger sister. He is a champion sumo wrestler and has been competing for seven years. He was very overweight at three years of age, so his parents decided to introduce him to sumo wrestling. He is currently one of the heaviest in his age group at sumo school. He is used to eating three large meals a day, including hot dogs and scrambled egg for breakfast, but he is becoming increasingly concerned about his weight, especially since one of his friends died of a heart attack linked to obesity. At school, his friends admire him because he never loses a wrestling match. Ryuta also belongs to the scout movement and enjoys outdoor activities like hiking, cycling and camping. In his spare time he likes to watch television or play computer games. Ryutaâ&#x20AC;&#x2122;s ambition is to be a television host one day, and also to have a family. Where Children Sleep by James Mollison

Where Children Sleep by James Mollison