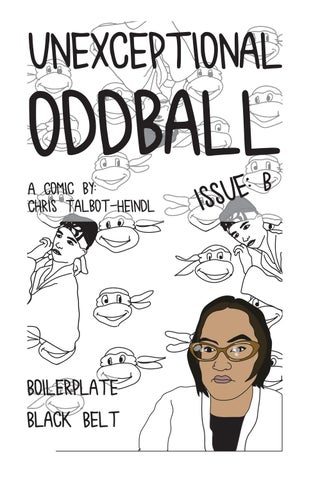 Oddball A Comic by: Chris Talbot-Heindl

AS a child, I always thought I’d be something, do something. I thought that the only goal in life was to find something you excelled at. Really dedicate your life to it. Become a super [(fill in the blank)].

At 30, I decided that was not going to happen. If i was pre-destined to be good at something, I hadn’t found it. And at 30, there really wasn’t time to become a prodigy at any one thing. i would always be unexceptional.

When I was 7, my parents enrolled my sister and myself in karate classes as a reaction to our continual bus stop incidents. I started your standard, goofy, klutzy karate kid, but I wanted to be more.

When I was about 9, I decided that what would help me accomplish this was to look like a real karate kid. I shaved my head and kept a rat-tail so I could look like all the star karate kids of the early 90â&#x20AC;&#x2122;s. Needless to say, it didnâ&#x20AC;&#x2122;t help my skills.

When the studio I was attending eventually became a factory for misbehaving child black belts, we switched to a Tae Kwon Do studio across town, despite being two belts away from black. When I was 13, I achieved my black belt at the Tae Kwon Do studio. I thought I had failed for sure. I was testing with three other people - David Malcolm, a gigantic genius; Mr. Rocky, a somewhat machismo but spry fighter, another man I canâ&#x20AC;&#x2122;t remember at the moment, and my dad.

In one of the tests, we each had to take our turn sparring all of the other testers. When my turn came, adrenaline kicked in, I grabbed my dad and used him as a human shield to back my way to the door. I made sure to shove him toward the other assailants before bowing out and running out of the testing room.

Instead I judged children’s forms and sparring - and was often booed by pageant moms who didn’t appreciate my low scores for forms that were a string of gymnastic stunts with no real martial arts in them. One mother said I only judged them so low because I was jealous because I couldn’t do what they did.

While I’m nothing to write home about, my forms always included actual martial arts and I’m pretty proud of that. I could have ended up like so many 80’s/90’s karate kids - doing flips, flopping kicks, and eventually tearing ligaments in my knees from a severe lack of technique. I’d take being a boilerplate Black Belt over that any day of the week.