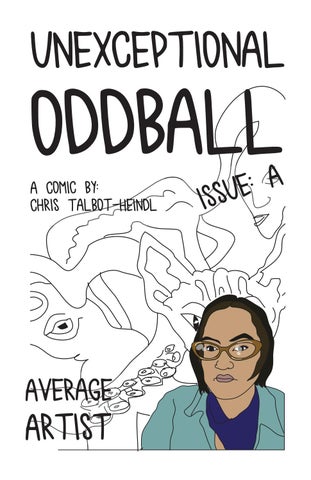 Oddball A Comic by: Chris Talbot-Heindl

AS a child, I always thought I’d be something, do something. I thought that the only goal in life was to find something you excelled at. Really dedicate your life to it. Become a super [(fill in the blank)].

At 30, I decided that was not going to happen. If i was pre-destined to be good at something, I hadn’t found it. And at 30, there really wasn’t time to become a prodigy at any one thing. i would always be unexceptional.

I remember winning some sort of art award in elementary school for some god-awful finger painting that looked like a cross between a tiger, a leopard, and a teddy bear. Everyone hemmed and hawed over it.

As each year went, people hemmed and hawed a little less. the pictures no longer won awards; they were no longer put on the fridge or framed and hung in my dadâ&#x20AC;&#x2122;s office. like the tig-pard-teddy was..

EVENTUALLY, I STOPPED MARKING ART. MY GUIDANCE COUNSELOR ASKED ME, “DO YOU REALLY WANT TO HAVE A STRING OF ART CLASSES ON YOUR ACADEMIC RECORD, OR DO YOU WANT AP CLASSES? YOU ALREADY HAVE ORCHESTRA.” SO I STOPPED MAKING ART.

You Can Do It

DO YOU REALLY WANT TO HAVE A STRING OF ART CLASSES ON YOUR ACADEMIC RECORD, OR DO YOU WANT AP CLASSES?

IN AP LITERATURE, WE WERE ASSIGNED TO DO SOMETHING CREATIVE - ANYTHING WE LIKED - BASED ON THE CLASSIC NOVEL WE HAD CHOSEN. I’D CHOSEN DANTE’S INFERNO AND COULD THINK OF NOTHING BETTER THAN TO PAINT WHAT I SAW in my head. I DUSTED OFF MY ART SUPPLIES AND DID WHAT I COULD, WHICH AT THIS POINT WASN’T MUCH. NO ONE HEMMED AND HAWED, BUT I DECIDED I WANTED TO MAKE ART AGAIN, NO MATTER HOW I AVERAGE I WAS AT IT.

IN FACT, I MAJORED IN IT IN COLLEGE. AN EXCEPTIONAL CLASSMATE OF MINE DISCUSSED HOW SHE RATED ARTISTS - “IF YOU CAN’T DRAW SOMETHING FROM YOUR MIND, YOU AREN’T A REAL ARTIST.” At first that really bothered me. I always need reference material. If none is immediately available, I need to take a picture of myself in whatever pose I need.

My senior art thesis project may not have won any awards, and neither did I in all of my college career. my final thesis project earned me a “C” grade - completely average - and the critique that it was “lowbrow.” But to me, it was a success, I saw people getting riled up and interacting with my piece as I hid in the corner of a different area of the gallery.

I also remember the Dean of the school mentioning that he was not the best artist in his graduating class, but at the end of his school career, the commencement speaker announced that only 10% of those graduating would continue to be artists later in life. He decided then that he would be one of those 10%. I decided I would be as well.

I may have peaked at 6 years old with my indecipherable tiger/leopard/teddy bear creature, but since graduating, Iâ&#x20AC;&#x2122;ve made a business around artwork - no matter how average it may be.