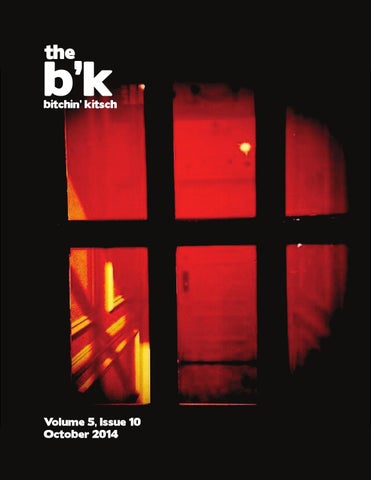 The Bitchin’ Kitsch is a zine for artists, poets, prose writers, or anyone else who has something to say. It exists for the purpose of open creativity. All submissions are due on the 26th for the following month’s issue. Please review the submission guidelines on our Submissions page (www.talbot-heindl.com/bitchin_kitsch/submissions) before submitting your work.

Printing costs can be a bitch, which is why we continuously look for donations. Any amount helps and is appreciated. We also sell back copies of The B’K. To do either, visit our Shop The B’K page (www.talbotheindl.com/support_us/shop_thebk).

On top of being the best publication ever created by human hands, The B’K would also like to present other opportunities that may be helpful to you as creators. If you have suggestions that could improve our list, please let us know. Resources we are privy to can be found at our Resources page (www.talbot-heindl.com/bitchin_kitsch/resources).

19 – Pressure It Is But Do Not Crack, Kudzai Mahwite 20 – Bedtime, Jeremiah Walton

13 – A Vial of Aphrodisia, Rachel Ford

By: Robin Wyatt Dunn No one and everyone in the evening, long wondering, on the last night, on the overflight, rich with meaning, ecstatic luminous, free, a synapse, stock full of the wall, stock full of the final wall, a kind of worship, a kind of terror, a kind of the final fact, a kind of the last and the time after the last, whose treasures know no absences or blockages, or quotidian lies... In the time after the last, the lies are the deeper kind of lie, the kind we fear, the kind we need more than anything, the kind that builds societies, the kind that is terrifying to me, a grace. No one and everyone in the evening shall revere their own knowledge of themselves, when it arrives, when it dominates the self, when it no longer remembers times before this building of the final evening in the self. Some shape of something which we will know, which we will at last realize is the shadow self we hold inside, in the break― These days are ephemeral, inevitably they are, days which you can hardly feel even when they are here around you, when they are at last here around you, when at last these lights build your absence into a page, a page you will welcome, though you might not have done so before, because you were terrified of it, because you understood it to be something you would need, if only subliminally, if only a last vestige of what we need, after all else is forgotten. Perhaps we cannot imagine anything else. Perhaps we will recognize it when it arrives. Perhaps we will understand that it is never more than we need, merely a portion, insubstantial but completely filling, a ritual with no precedent. A stopgap for the times to come. -It wasn’t anything suspicious. It wasn’t anything but a knowledge of adoration. Adorable the adoration, the memory of the need, that rides the soul, like a rich feeling of swift goodbye, her legs next to yours―

you don’t know that old paint is poison your skin was black before it was golden since it’s always thick when PEOPLE ARE LAYERED— your insides squeeze past gator skin: eruptions erode the surface with nothing left to spill but a truth within tectonic plates below this tundra— remind me of warmer days when moisture and expansion were exposure while tears made their way through your temple from hidden places— I long for solace in your summer solstice— I recline beneath and drink in blindness: nothing feels right and must be the only right I have? lead is dark and depressing— we forgot who we were: everyone becomes a turning and twisting of events on the inside

House of the Astrologically Compliant By: Colin James

Quickly, to the labyrinth. This could be our room after observing your eyes embellish like plantings of green phosphorescence. Clear decorations to stop thought have been added on and up, officially improved upon. Rooms come and go in the night. So tidal, I have your back. Positive, like a fire escape with an infinity departure warning sticking to the descendants of prophesies.

Here’s to the drinkers The tipplers and drunks The hearty partakers The pleasantly funked, Who range far and wide On foot, bike or ride To, then from Fields Where points from goals yield The next crop of Mighty Can Blossoms The Sun now ducks low ‘Midst pops, thunks and rolls From centers of flatland Some pods hit the shoals. Twixt belches and heaves Pods echo, feet weave Past houses and cars In these wakes are Can Blossoms grown. By moonlight and bulb The seeds, they are sown ‘Neath bush or in branches Still others romance us From perches on ledges In hassocks of sedges Silent To bloom with the dawn. The Planters rise not They suffer gut rot But those of us up with the Sun Spy glint, flash and glimmer Some nectar still shimmers On Can Blossoms now in full bloom.

Letter to a Friend By: Andrew J. Ringlund Dearest Golem, I’ve heard lately that you’re feeling lonely and Wendy has informed me of your bouts of depression. You’ve got to get out more! I know how the townsfolk feel about your recent murders, but Christianity teaches forgiveness to Jews and Gentiles alike. I’m sure that extends to rock formations as well. They will come to appreciate your particular charm. You should go to the open mic night in the village and read some of those sonnets you’ve written. People are always more forgiving of violent outbursts from artistic types. And let some of that green moss grow on you. I believe that will make you more approachable. Just wanted to let you know I was thinking about you. Best Wishes, Rick P.S. Still listening to those Dexter Gordon albums you left me.

By: Martin Tomlinson Before TV we just masturbated The radio jingles danced to the sounds of our hands Before TV we watched real life reality television Our parent’s voices echoing from the living dishes breaking the fourth wall In those days I slept a lot escaping an all too real reality I didn’t need to watch other dysfunctional families to know what was wrong 11

The stories of goddesses, whose wrath menaces men far beyond the might of any lightening craft fashioned by gods who know only the brute of the anvil, frequently lays bare all of the power we often overlook when scriptures tell us love is meek, unassuming, rather than the torrential storm, passion’s whirlwind, which expires into flames unquenched, lust that burns whole cities just to abduct one princess, to cuff her to a bed built out of desire’s imagination - black and roped - the concretization of pleasure made real, without even considering that this is also her endgame, the taking of her, the pin prick of her finger, the immersion of flesh in Hedone’s sleep that makes the theft of her from a time and place a mere pittance for what such consumption by heady monsters is really worth - the desecration of castles that hide such Venuses draped in red, who have been waiting for beasts to save them from the threat of chastity belts who have clamping mouths more terrifying than the injection of dragon venom into longing thighs.

Rates of statistics from catastrophic climate critics not listened to; upon the mountain a mother and child under shadows of trees; only drops of rain.

it crawls from the bed at 4pm it is ashamed it had thought of a different day it was caught in another time it notices a smell of vegetarian spaghetti from the kitchen in daylight 3 months on an air mattress in a living room nose deep in bedlam it wakes to tell itself to fall asleep it drinks coffee, lots of coffee it breaks under the weight of transition it sips on diphenhydramine until things slow down it dreams of washing its brain out with soap it doesnâ&#x20AC;&#x2122;t hurry to make the day it waits for the mountains to stop being so mountainous 3am to 1pm 4am to 3pm then to 4pm it has discovered post-love it has uncovered no meaning from this it waits on a bridge of bedlam for something to call from any direction

There is a pair of eyes like my pair of eyes, except not looking through crafted lenses made in one hour, buy one get one special low price These are real eyes peering up and down the street Sometimes I feel stirring, the desire to step out in the cricket night and traipse into the ink See what we can see See whatâ&#x20AC;&#x2122;s round the bend Maybe we are all just wolves inside just constantly shaving off our fur pretending to enjoy the stitches stretching politeness to the seam.

For Those Who Know W. Jack Savage Painting

By: Dr. Mel Waldman Rabid dogs dive into swirling shadows melting on a sweltering summerâ&#x20AC;&#x2122;s day and disappear. & multicolored leaves wafting to earth merge with a mutilated landscape of vanishing objects in a scorching fall that does not exist yet. I canâ&#x20AC;&#x2122;t bear the crimson losses that invade my micro-universe, a brokendown house with vacant rooms and a panoramic view of death through bloodstained windows. Outside, moribund mustangs gallop across Ocean Parkway and collapse in the deep snow of chimerical Brooklyn, on the rim of Coney Island, dead eyes gazing at the Wonder Wheel whirling in the distance. Death and other losses pummel my soul, a shattered branch dangling above the frozen seething abyss. & even furious memories buried in old seasons, the containers of the past, dissolve into a haunting absence that permeates the ancient void, howling interminably beneath the smothering silence.

kudzai mahwite. Pressure It Is But Do Not Crack By: Kudzai Mahwite

Wit and interest sure be stale, Angry and dry but sure not pale, Sure could do with a glass of ale, Yet this is my boat and I must sail. Dawn did break before timers creak, Nightly bobbing, rest not robbing, Gothic vision of what could be, Yet bliss do line sweet reminisce. When heat do atoms make awake, Felt I the leak where timber crack, Knew full well what I do lack, Some peace and rest before timbers break.

By: Jeremiah Walton Before burning out at sunrise I look in the mirror to see if anything new has been written.

By: Leslie Philibert a tall blonde, white plaited with salt all elbows and knees, a new menhir on a tided stage of tidewash and wind, crouched under a sky of ovens and red brick, serious and wide-eyed before a sandring that loses its smile as the sun drowns and the sea turns to black.

we love our donors!

(It eats Donations and sales) www.talbot-heindl.com/support_us

The Bitchin' Kitsch is a zine for artists, poets, prose writers, or anyone else who has something to say. It exists for the purpose of open...

The Bitchin' Kitsch is a zine for artists, poets, prose writers, or anyone else who has something to say. It exists for the purpose of open...