The Bitchin' Kitsch May 2015 Issue 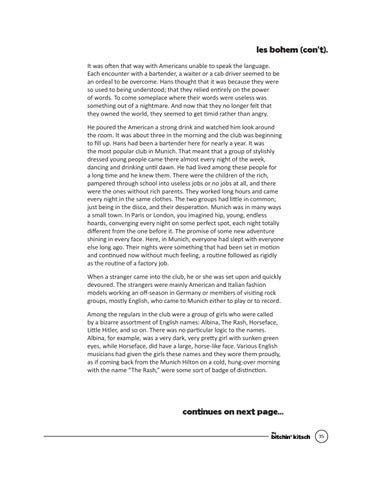 les bohem (conâ&amp;#x20AC;&amp;#x2122;t). It was often that way with Americans unable to speak the language. Each encounter with a bartender, a waiter or a cab driver seemed to be an ordeal to be overcome. Hans thought that it was because they were so used to being understood; that they relied entirely on the power of words. To come someplace where their words were useless was something out of a nightmare. And now that they no longer felt that they owned the world, they seemed to get timid rather than angry. He poured the American a strong drink and watched him look around the room. It was about three in the morning and the club was beginning to fill up. Hans had been a bartender here for nearly a year. It was the most popular club in Munich. That meant that a group of stylishly dressed young people came there almost every night of the week, dancing and drinking until dawn. He had lived among these people for a long time and he knew them. There were the children of the rich, pampered through school into useless jobs or no jobs at all, and there were the ones without rich parents. They worked long hours and came every night in the same clothes. The two groups had little in common; just being in the disco, and their desperation. Munich was in many ways a small town. In Paris or London, you imagined hip, young, endless hoards, converging every night on some perfect spot, each night totally different from the one before it. The promise of some new adventure shining in every face. Here, in Munich, everyone had slept with everyone else long ago. Their nights were something that had been set in motion and continued now without much feeling, a routine followed as rigidly as the routine of a factory job. When a stranger came into the club, he or she was set upon and quickly devoured. The strangers were mainly American and Italian fashion models working an off-season in Germany or members of visiting rock groups, mostly English, who came to Munich either to play or to record. Among the regulars in the club were a group of girls who were called by a bizarre assortment of English names: Albina, The Rash, Horseface, Little Hitler, and so on. There was no particular logic to the names. Albina, for example, was a very dark, very pretty girl with sunken green eyes, while Horseface, did have a large, horse-like face. Various English musicians had given the girls these names and they wore them proudly, as if coming back from the Munich Hilton on a cold, hung-over morning with the name â&amp;#x20AC;&amp;#x153;The Rash,â&amp;#x20AC;? were some sort of badge of distinction.

The Bitchin' Kitsch May 2015 Issue

The Bitchin' Kitsch is a zine for artists, poets, prose writers, or anyone else who has something to say. It exists for the purpose of open creativity. 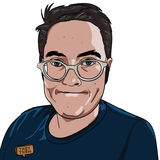