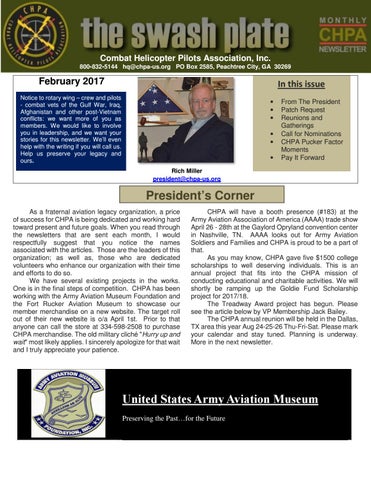 Notice to rotary wing – crew and pilots - combat vets of the Gulf War, Iraq, Afghanistan and other post-Vietnam conflicts: we want more of you as members. We would like to involve you in leadership, and we want your stories for this newsletter. We’ll even help with the writing if you will call us. Help us preserve your legacy and ours.

President’s Corner As a fraternal aviation legacy organization, a price of success for CHPA is being dedicated and working hard toward present and future goals. When you read through the newsletters that are sent each month, I would respectfully suggest that you notice the names associated with the articles. Those are the leaders of this organization; as well as, those who are dedicated volunteers who enhance our organization with their time and efforts to do so. We have several existing projects in the works. One is in the final steps of competition. CHPA has been working with the Army Aviation Museum Foundation and the Fort Rucker Aviation Museum to showcase our member merchandise on a new website. The target roll out of their new website is o/a April 1st. Prior to that anyone can call the store at 334-598-2508 to purchase CHPA merchandise. The old military cliché &quot;Hurry up and wait&quot; most likely applies. I sincerely apologize for that wait and I truly appreciate your patience.

CHPA will have a booth presence (#183) at the Army Aviation Association of America (AAAA) trade show April 26 - 28th at the Gaylord Opryland convention center in Nashville, TN. AAAA looks out for Army Aviation Soldiers and Families and CHPA is proud to be a part of that. As you may know, CHPA gave five $1500 college scholarships to well deserving individuals. This is an annual project that fits into the CHPA mission of conducting educational and charitable activities. We will shortly be ramping up the Goldie Fund Scholarship project for 2017/18. The Treadway Award project has begun. Please see the article below by VP Membership Jack Bailey. The CHPA annual reunion will be held in the Dallas, TX area this year Aug 24-25-26 Thu-Fri-Sat. Please mark your calendar and stay tuned. Planning is underway. More in the next newsletter.

Do you have Patches? Several of you have graciously donated patches or pictures of them to CHPA. Please dig through your old patches and consider donating or taking a picture of it and sending to us for inclusion in the newsletter. Email to hq@chpa-us.org Mail to CHPA, PO Box 2585, Peachtree, GA 30269

Robert N. Treadway Award I’m pleased to announce the call for nominations for the Robert N. Tredway Award. The Robert N. Tredway Award is presented by CHPA to an individual or corporation for demonstrated accomplishments in support of one or more of the following: the United States military helicopter community, U.S. military veterans with an emphasis on helicopter veterans, the Combat Helicopter Pilots Association, and the community at large. The award is presented in honor of COL(R) Robert Tredway (USA), a founding member of CHPA. COL(R) Tredway was a 1958 graduate of the United States Military Academy at West Point, Vietnam veteran and recipient of the Silver Star, two Distinguished Flying Crosses, four Bronze Stars, and two Purple Hearts during two tours of combat duty.

Have you contributed at least one of your Pucker Factor moments to The Swashplate? If not, why haven’t you pulled pitch and done so? The moment your rear-end took a big bite out of the cockpit seat is something your fellow CHPA members will instantly find familiar. It is not necessary that you be an award winning author. Put everything into your own words and we will be standing

Nominations for this most prestigious award may be submitted by email at hq@chpa-us.org not later than 1 May 2017. Not late submissions will be considered. The nomination committee will review all nominations and put forth its recommendation to the board not later than 1 July 2017. Award presentation will be made at the CHPA annual Conference in September. If there are any questions, please forward them to me at: vp-mbrs@chpa-us.org or jackbaileyjr2014@gmail.com Jack Bailey VP Membership Nomination Committee Member

by if you want help to put it into “smoother” words. Every month we try to bring you relevant articles and notices that interest members. Of course that entails gathering news items and articles from various sources and varying topics. We hope we’re meeting your needs and would like to hear from you. HQ@chpa-us.org or give us a call at 800-832-5144 and let us know

“TANK” HUNT IN CAMBODIA By Skip Bell In March 1972, C Troop, 3/17 Air Cavalry Callsign: Lighthorse) was attached to 7/1Cavalry and was flying out of Vinh Long Airfield in the Mekong Delta of South Vietnam. I was assigned to the gun platoon (Callsign: Crusaders). When we had missions in the western Mekong Delta, we staged out of an airfield at a place

called Chi Lang (about one kilometer from the Cambodian border near a prominent terrain feature called the Seven Sisters Mountains (yes, there were mountains in the Delta – not many, but they were there)). Chi Lang was an interesting place to stage out of; it was the headquarters for the 44th Special Tactical Zone

(an organization whose mission I wasn’t sure of, but I suspect it had something to do with cross-border operations since their troops were ARVN Rangers and Special Forces units). Another organization at Chi Lang was the New Zealand Army’s contribution to the Vietnam War (at that time) – a school for mid-level Vietnamese officers (roughly equivalent to our Command and General Staff School). There were a total of 50 people assigned to that school – 49 of them were New Zealand Army officers, and the 50th member of the group was the cook (the sole enlisted man). He was an excellent cook (had trained in civilian hotels and restaurants in New Zealand) and we took our meals in their mess hall whenever the OPTEMPO would permit it. In addition, he would bring us out cookies and lemonade when we were on strip alert. The photograph below was taken while we were on strip alert at Chi Lang airfield. One day when we were working out of Chi Lang, we got scrambled to go into Cambodia and look for a North Vietnamese tank that had been reported by a VNAF (South Vietnamese Air Force) FAC (Forward Air Controller). We had been hearing rumors that Russianor Chinese-made PT-76 tanks had been seen in southern Cambodia and we jumped at the chance to go get one. Operating policy at that time stated that we could not take Scout aircraft (OH-6) into Cambodia, so we went in with two Cobra’s and a UH-1H that was acting as both Command &amp; Control (C&amp;C) aircraft for the mission and as our “scout.” The Huey was flying low (20’ AGL) and the two Cobras were high (at approximately 1,500’ AGL). (The SA-7 “Strella” shoulder-fired anti-aircraft missile had not been introduced into South Vietnam-Cambodia at that time so the guns still flew high – this would change later on). The lead gunship pilot did the map reading and guided the UH-1 while it was flying low. The Air Mission Commander (flying the UH-1) was the Gun Platoon Leader, CPT George Anderson. George was on his second tour of duty in Vietnam (his first had been as an infantry officer in the 101st Airborne Division where he was awarded the Silver Star). George was a good Platoon Leader – he led from the front, was cool under pressure, and his laconic Arkansas accent rarely reflected any sense of stress when he talked on the radio. As we began to search the area where the tank had been reported, the UH-1 dropped out of the sky and began to fly low and fast over the terrain (which was a flood plain, flat and dotted with trees with long bare trunks and foliage on the top except for the occasional piece of higher ground that had scrub bushes in addition to the tall trees). In order to be as fleeting a target as possible, the UH-1 was jinxing and alternating its airspeed between 20 knots and 80 knots and varying its direction of flight. The Cobra’s were flying a “racetrack” pattern over the UH-1, with the inbound aircraft ready to dive in and cover him when/if he took fire. Suddenly we heard George’s voice on the radio, and he clearly was excited and concerned. He said, “We just took a hit and I don’t know what it was

Pay it Forward means you buy the 1st year membership for a qualified friend, ask him to do the same and keep it going, and CHPA grows. The distinguished membership of this organization represents all four services, including active and reserve components; it represents service in every combat action dating to the Korean conflict; and its members have close to a half million combined combat flying hours. The term “distinguished” is not used for flattery. Growing the organization and helping CHPA keep its commitment to preserving the legacy of helicopter combat aviation, supporting veteran’s causes and providing charitable services is dependent upon the talent, engagement and support of all its members.

I’m appealing to you for help. I’m asking you consider a one-year gift membership for a colleague. It is a $40 investment in “paying it forward” to help stabilize our membership and build a way forward for growth. If you can support this effort with just one new member, the impact will be significant. I, other Board Members, past officers, and members like Lauri Pope have embraced this project by sponsoring new members. Like you, I believe in CHPA and our mission and I’m proud to consider you all friends and colleagues. The following ad will appear in the next VHPA magazine, and may help introduce your friends to CHPA. Please join me in making ChPA grow. Regards to each of you.

Check (Payable to CHPA, mail to address above) 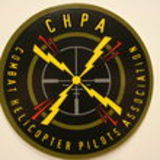