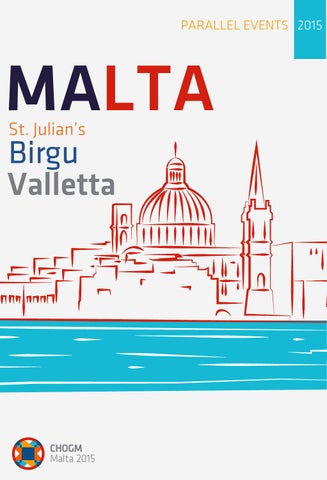 GLOBAL TOUR To celebrate the 800th anniversary of Magna Carta, Hereford Cathedralâ&amp;#x20AC;&amp;#x2122;s 1217 version of Magna Carta, one of only four such surviving copies will be on public display at the National Library on 28 and 29 November 2015. This is part of an exclusive Global Tour.

This is an annual international arts festival for

children and young people held in Valletta. This year, CHOGM Malta 2015 will be partnering up with Ziguzajg for a Commonwealth edition of this festival. It will include 28 productions featuring artists from Commonwealth countries. Some of the best Maltese works will be presented to international programmers.

Inspired by the work of the UK Governmentâ&amp;#x20AC;&amp;#x2122;s Foresight Future of Cities project which has been considering the way in which some of these issues will affect the future of cities in the UK.

RESOUNDS IN MALTA A free concert aimed at showcasing the cultural diversity of the Commonwealth. Various musicians, singers, dancers from Commonwealth regions will come together in a multi-sensory performance in various ensemble formats.

THE ROYAL FAMILY A PRIVATE COLLECTION OF LIMITED EDITION COMMEMORATIVE

This is an exhibition of high-quality ceramics related to the British Royal Family. The collection includes items in Bone China &amp; Glass commemorating various events throughout the Royal Familyâ&amp;#x20AC;&amp;#x2122;s years. A large majority of the items are British made by the most prestigious brands such as Wedgwood, Royal Daulton and Spode &amp; Royal Worcester. The exhibition is aimed at giving the VIPs and the general public the opportunity to view these valuables during the month of CHOGM Malta 2015.

AND ITS PEOPLE EXHIBITION

Last June, a conference in collaboration with the Ministry of Education and Employment and the Ministry of Social Dialogue, Consumer Affairs and Civil Liberties was held at the University of Malta, Valletta Campus. The conference was based on a set of themes namely Departure; Memory and Nostalgia; Identity; and Return. This art exhibition will be a continuation of what was discussed during the conference in June and will follow the same 4-part structure. Although still the time period is still to be confirmed, the exhibition should run for around 3 weeks.

Panorpheus is a project bringing together 53 composers from each of the Commonwealth countries, each writing a piece of music including flutes and harps. These musical pieces will be performed in 5 concerts running through a single day. Composers who do not write notated music have been invited to video a live performance of their music in their own country and send it to us instead.

The walkways are urban trails which would allow visitors to Valletta to spend an hour following the route marked out by a disc-marker using a EIIR (Elizabeth II Regina) cypher (which has been approved by the Queen). This will take you to all the key must-see landmarks found in Malta’s capital city. The discs are described as “very handsome” and next to each one is an I beacon, which relates to an app you can have on your phone telling you about the particular landmark you are next to.

EXHIBITION ‘Time to See’ captures the impact that completely avoidable causes of blindness are having on people across the Commonwealth, and work that The Queen Elizabeth Diamond Jubilee Trust and Standard Chartered are developing and supporting to fight these conditions. From late 2015, imagestaken by multi-award winning photojournalists Marcus Bleasdale, Ashley Gilbertson and Poulomi Basu will embark on a global tour to bring avoidable blindness – and the solutions readily available to end it – to the world’s attention.

OPENING CEREMONY EXTRA PERFORMANCES Extra performances of the opening ceremony will be held at the Mediterrenean Conference Centre and all proceeds from ticket sales will go to charity. This will give both local and foreign audiences a chance to view the same performance presented to distinguished guests on the 27th and 28th of November.

OUT OF THE BLUE PHOTOGRAPHIC EXHIBITION BY

THE PRINCE’S TRUST Organised by the Prince’s Trust, this exhibition is an opportunity to showcase the value and importance of our blue planet and will be held this November. The Heads of Commonwealth Governments will meet together in Malta to discuss issues of critical global importance, such as the future of the planet’s Blue Economy – that is, the economic activity that is dependent on oceans, seas and coasts.

OF A POLIO FREE WORLD BY ROTARY INTERNATIONAL

The polio exhibition is organised by Rotary Club Malta as part of the ‘Art of Saving a Life Project’. It is a collection of how vaccines continue to change the course of history. It gives everyone an opportunity to see how immunization has truly effected the course of global health. The exhibition will showcase a number of artists’ works visualising the urgency on the global community to reach all children with the life-saving vaccines they need. More than 30 world-renowned artists created representations focused on the past, present and future impact of immunization – each piece is drawn from the individual artist’s inspiration.

Malta Enterprise and Malta Life Sciences Park in collaboration with University of Malta, Faculty of Medicine and Surgery and Barts and The London School of Medicine and Dentistry, Queen Mary University of London will be presenting a Scientific Meeting entitled Comparing Research Agendas in Oncology. This meeting will see the participation of 12 researchers who will be presenting their findings in research related to cancer particularly in Breast, Pancreatic, Brain, Colorectal Cancer and Leukaemia. Attendance is free but limited space is available. Interested attendees are to email ingrid.vella@maltaenterpise.com to reserve a place.

A discussion focusing on the social circumstances in which people live and age, their educational system and the impact of social policies on health outcomes is being held. While more emphasis shifts to the biological determinants of health (genetics and personalised medicine), the discussion aims to highlight the importance of many other ‘non-medical’ policies from education to economic policy that can have an impact on health. This Commonwealth People’s Forum Satellite Meeting is organised as a collaboration between the Commonwealth Medical Association and the Medical Association of Malta. The discussion is primarily aimed at those involved in medical, nursing and paramedical professions.

Internationally recognised lighting designer working in the fields of live music, opera, dance, film, architecture and special events, Patrick Woodroffe, will be giving a public talk to all interested in the field of lighting design. Woodroffe will be providing the artistic lighting for the CHOGM Opening Ceremony and runs a successful lighting design consultancy with his long-time collaborator Adam Bassett, Woodroffe Bassette Design.

CEIP stands for the Commonwealth Environmental Investment Platform. The event is held alongside the Commonwealth Business Forum and CHOGM Malta 2015. Hosted by Commonwealth Argosy, the theme of the conference is ‘The Climate Challenge’ and will be looking at how the global economy needs to transform in order to accommodate the inevitable risks imposed by climate change. The conference will also be exploring some of the key themes of the recent New Climate Economy Report.

A one-day conference previewing CHOGM is being organised by the Round Table: The Commonwealth Journal of International Affairs with the Department of International Relations at the University of Malta. The sessions will be treating topical issues relating to the Commonwealth and its contribution to security and identity, among other current issues of concern. Interested attendees are to e-mail Ms. Annelise Calleja on annelise.calleja@um.edu.mt

The 2015 Commonwealth Round Table Lecture will be delivered by the distinguished former Prime Minister of Malta, Dr. Lawrence Gonzi. Speaking after the official opening of CHOGM earlier that day, the title of his address will be: ‘The Commonwealth, The European Union, The Challenges.’ He is expected to argue for a rekindling of the Commonwealth spirit in accordance with its core values and to point out the linkages with the European Union as an opportunity ‘to add global value’ (the general theme of CHOGM 2015). He will be identifying key challenges which include migration, fundamentalism and global poverty, and offer his own way forward. The lecture is organised and sponsored by The Round Table: The Commonwealth Journal of International Affairs. Entrance is free but seating is limited. To reserve a place contact Alex May (Hon Secretary, the Round Table) on alex.may@oup.com