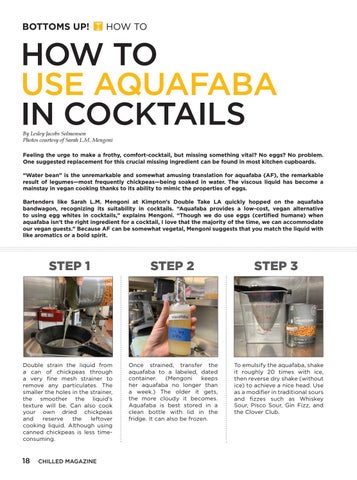 HOW TO USE AQUAFABA IN COCKTAILS By Lesley Jacobs Solmonson Photos courtesy of Sarah L.M. Mengoni

Feeling the urge to make a frothy, comfort-cocktail, but missing something vital? No eggs? No problem. One suggested replacement for this crucial missing ingredient can be found in most kitchen cupboards. “Water bean” is the unremarkable and somewhat amusing translation for aquafaba (AF), the remarkable result of legumes—most frequently chickpeas—being soaked in water. The viscous liquid has become a mainstay in vegan cooking thanks to its ability to mimic the properties of eggs. Bartenders like Sarah L.M. Mengoni at Kimpton’s Double Take LA quickly hopped on the aquafaba bandwagon, recognizing its suitability in cocktails. “Aquafaba provides a low-cost, vegan alternative to using egg whites in cocktails,” explains Mengoni. “Though we do use eggs (certified humane) when aquafaba isn’t the right ingredient for a cocktail, I love that the majority of the time, we can accommodate our vegan guests.” Because AF can be somewhat vegetal, Mengoni suggests that you match the liquid with like aromatics or a bold spirit.

Double strain the liquid from a can of chickpeas through a very fine mesh strainer to remove any particulates. The smaller the holes in the strainer, the smoother the liquid’s texture will be. Can also cook your own dried chickpeas and reserve the leftover cooking liquid. Although using canned chickpeas is less timeconsuming.

Once strained, transfer the aquafaba to a labeled, dated container. (Mengoni keeps her aquafaba no longer than a week.) The older it gets, the more cloudy it becomes. Aquafaba is best stored in a clean bottle with lid in the fridge. It can also be frozen.

To emulsify the aquafaba, shake it roughly 20 times with ice, then reverse dry shake (without ice) to achieve a nice head. Use as a modifier in traditional sours and fizzes such as Whiskey Sour, Pisco Sour, Gin Fizz, and the Clover Club. 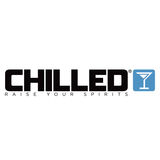