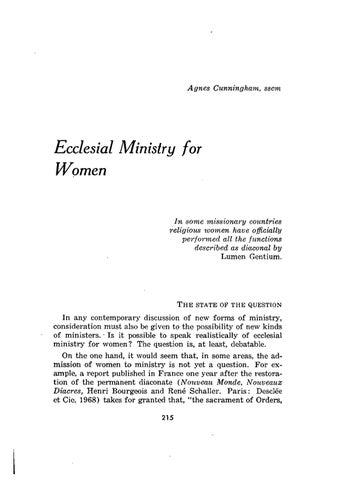 In some missiona1·y countries 1·eligious women have officially pe.·formed all the functions described as diaconal by Lumen Gentium.

THE STATE OF THE QUESTION

In any contemporary discussion of new forms of ministry, consideration must also be given to the possibility of new kinds of ministers. - Is it possible to speak realistically of ecclesial ministry for women? The question is, at least, debatable. On the one hand, it would seem that, in some areas, the admission of women to ministry is not yet a question. For example, a report published in France one year after the restoration of the permanent diaconate (Nouveau Monde, Nouveaux Diacres, Henri Bourgeois and Rene Schaller. Paris: Desclee et Cie, 1968) takes for granted that, &quot;the sacrament of Orders, 215