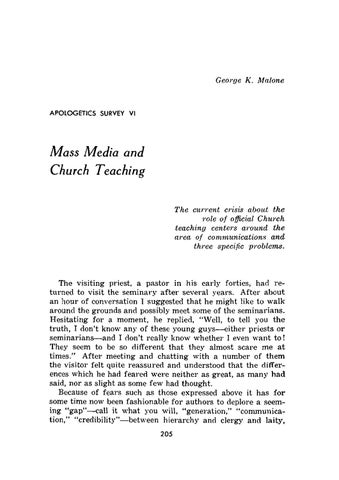 The visiting priest, a pastor in his early forties, had returned to visit the seminary after severa! years. After about an hour of conversation 1 suggested that he might like to walk around the grounds and possibly meet sorne of the seminarians. Hesitating for a moment, he replied, &quot;Weil, to tell you the truth, I don&#39;t know any of these young guys-either priests or seminarians--and I don&#39;t really know whether I even want to! They seem to be so different that they almost scare me at times.&quot; After meeting and chatting with a number of them the visitor felt quite reassured and understood that the differences which he had feared were neither as great, as many had said, nor as slight as sorne few had thought. Because of fears such as those expressed above it has for sorne time now been fashionable for authors to deplore a seeming &quot;gap&quot;--caB it what you will, &quot;gene1·ation,&#39;&#39; &#39;&#39;communication,&quot; &quot;credibi!ity&quot;-between hierarchy and c!ergy and Jaity, 205