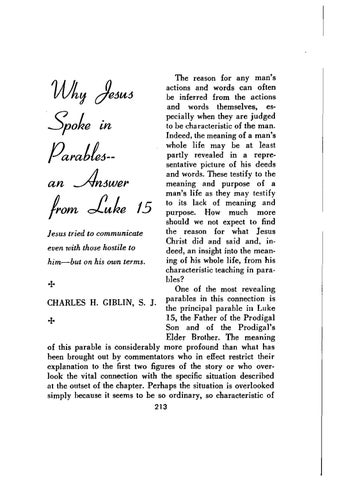 The reason for any man&#39;s actions and words can often be inferred from the actions and words themselves, especially when they are judged to be characteristic of the man. Indeed, the meaning of a man&#39;s whole life may be at least partly revealed in a representative picture of his deeds and words. These testify to the meaning and purpose of a man&#39;s life as they may testify to its lack of meaning and purpose. How much more should we not expect to find the reason for what Jesus Jesus tried to communicate Christ did and said and, ineven with those hostile to deed, an insight into the meaning of his whole life, from his him-but on his own terms. characteristic teaching in parables? One of the most revealing parables in this connection is CHARLES H. GIBLIN, S. J. the principal parable in Luke 15, the Father of the Prodigal Son and of the Prodigal&#39;s Elder Brother. The meaning of this parable is considerably more profound than what has been brought out by commentators who in effect restrict tbei r explanation to the first two figures of the story or who overlook the vital connection with the specific situation described at the outset of the chapter. Perhaps the situation is overlooked simply because it seems to he so ordinary, so characteristic of