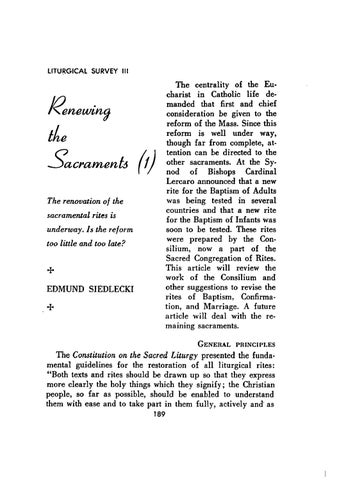 Renewin&#39;} lhe Sacramenlj The renovation of the sacramental rites is underway.ls the reform too little and too late?

The centrality of the Eucharist in Catholic life demanded that first and chief consideration be given to the reform of the Mass. Since this reform is well under way, though far from complete, attention can be directed to the other sacraments. At the Synod of Bishops Cardinal Lercaro announced that a new rite for the Baptism of Adults was being tested in several countries and that a new rite for the Baptism of Infants was soon to be tested. These rites were prepared by the Con. silium, now a part of the Sacred Congregation of Rites. This article will review the work of the Consilium and other suggestions to revise the rites of Baptism, ConfirmaÂˇ tion, and Marriage. A future article will deal with the remaining sacraments. GENERAL PRINCIPLES

The Constitution on the Sacred Liturgy presented the fundamental guidelines for the restoration of all liturgical rites: &quot;Both texts and rites should be drawn up so that they express more clearly the holy things which they signify; the Christian people, so far as possible, should be enabled to understand them with ease and to take part in them fully, actively andÂˇ as 189