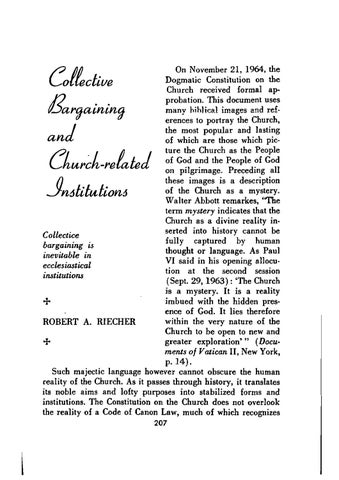 On November 21, 1964, the Dogmatic Constitution on the Church received formal apÂˇ probation. This document uses many hihlical images and references to portray the Church, the most popular and lasting of which are those which picture the Church as the People of God and the People of God on pilgrimage. Preceding all these images is a description of the Church as a mystery. Walter Abbott remarkes, &quot;The term mystery indicates that the Church as a divine reality inserted into history cannot be Collectice fully captured by human bargaining is thought or language. As Paul inevitable in VI said in his opening allocuÂˇ ecclesiastical tion at the second session institutions (Sept. 29, 1963): &#39;The Church is a mystery. It is a reality imbued with the hidden presence of God. It lies therefore ROBERT A. RIECHER within the very nature of the Church to be open to new and + greater exploration&#39; &quot; ( Documents of V caican II, New York, p. 14). Such rna jectic language however cannot obscure the human reality of the Church. As it passes through history, it translates its noble aims and lofty purposes into stabilized forms and institutions. The Constitution on the Church does not overlook the reality of a Code of Canon Law, much of which recognizes 207