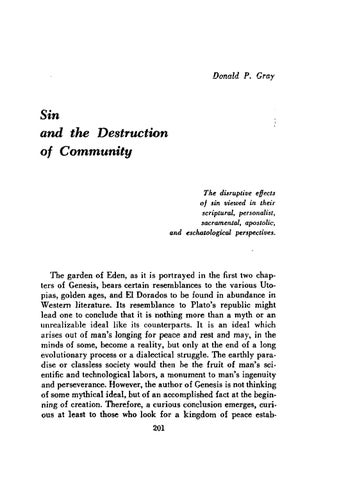 Sin and the Destruction of Community The disruptive effects of 5in viewed in their scriptural, personal~t, :Jacramental, apo~tolic, and eschatological penpectives.

The garden of Eden, as it is portrayed in the first two chap路 ters of Genesis, bears certain resemblances to the various Uto路 pias, golden ages, and El Dorados to be found in abundance in Western literature. Its resemblance to Plato&#39;s republic might lead one to conclude that it is nothing more than a myth or an unrealizable ideal like its counterparts. It is an ideal which arises out of man&#39;s longing for peace and rest and may, in the minds of some, become a reality, but only at the end of a long evolutionary process or a dialectical struggle. The earthly paradise or classless society would then be the fruit of man&#39;s sci路 entific and technological labors, a monument to man&#39;s ingenuity and perseverance. However, the author of Genesis is not thinking of some mythical ideal, but of an accomplished fact at the beginning of creation. Therefore, a curious conclusion emerges, curious at least to those who look for a kingdom of peace estab路