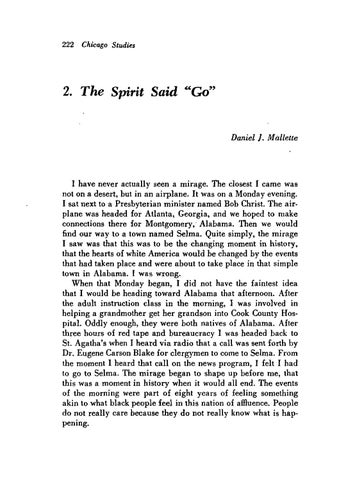 I have never actually seen a mirage. The closest I came was not on a desert, but in an airplane. It was on a Monday evening. I sat next to a Presbyterian minister named Bob Christ. The airplane was headed for Atlanta, Georgia, and we hoped to make connections there for Montgomery; Alabama. Then we would find our way to a town named Selma. Quite simply, the mirage I saw was that this was to be the changing moment in history, that the hearts of white America would be changed by the events that had taken place and were about to take place in that simple town in Alabama. I was wrong. When that Monday began, I did not have the faintest idea that I would be heading toward Alabama that afternoon. After the adult instruction class in the morning, I was involved in helping a grandmother get her grandson into Cook County Hospital. Oddly enough, they were both natives of Alabama. After three hours of red tape and bureaucracy I was headed back to St. Agatha&#39;s when I heard via radio that a call was sent forth by Dr. Eugene Carson Blake for clergymen to come to Selma. From the moment I heard that call on the news program, I felt I had to go to Selma. The mirage began to shape up before me, that this was a moment in history when it would all end. The events of the morning were part of eight years of feeling something akin to what black people feel in this nation of affiuence. People do not really care because they do not really know what is hapÂˇ pening.