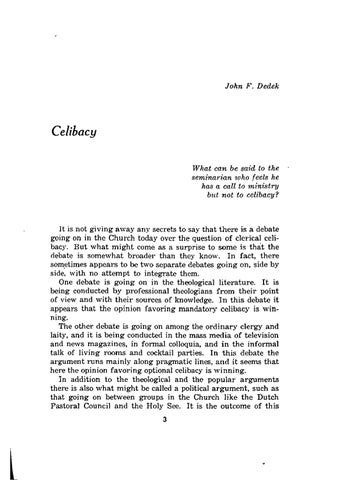 Celibacy What can be said to the seminarian who fee/.~ he has a caU to mini~try but not to celibacy?

going on in the Church today over the question of clerical celibacy. But what might come as a surprise to sorne is that the rlebate is somewhat broader than they know. In fact, there sometimes appears to be two separate debates going on, side by side, with no attempt to integrate them. One debate is going on in the theological literature. It is being conducted by professional theologians from their point of view and with their sources of knowledge. In this debate it appears that the opinion favoring mandatory celibacy is winning. The other debate is going on among the ordinary clergy and laity, and it is being conducted in the mass media of television and news magazines, in formai colloquia, and in the informai talk of living rooms and cocktail parties. In this debate the argument runs mainly along pragmatic li nes, and it seems that here the opinion favoring optional celibacy is winning. In addition to the theological and the popular arguments there is also what might be called a political argument, such as that going on between groups in the Church like the Dutch Pastoral Council and the Holy See. It is the outcome of this 3