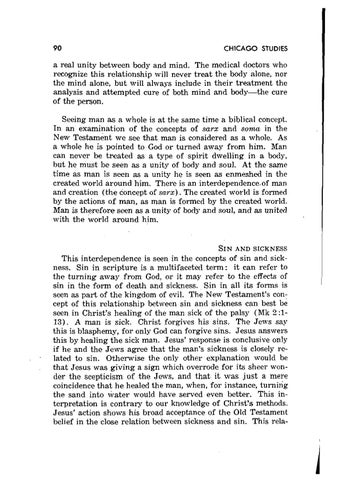 a real unity between body and mind. The medical doctors who recognize this relationship will never treat the body alone, nor the mind alone, but will always include in their treatment the analysis and attempted cure of both mind and body-the cure of the person. Seeing man as a whole is at the same time a biblical concept. In an examination of the concepts of sarx and soma in the New Testament we see that man is considered as a whole. As a whole he is pointed to God or turned away from him. Man can never be treated as a type of spirit dwelling in a body, but he must be seen as a unity of body and soul. At the same time as man is seen as a unity he is seen as enmeshed in the created world around him. There is an interdependence. of man and creation (the concept of sarx). The created world is formed by the actions of man, as man is formed by the created world. Man is therefore seen as a unity of body and soul, and as united with the world around him.

This interdependence is seen in the concepts of sin and sickness. Sin in scripture is a multifaceted term: it can refer to the turning away from God, or it may refer to the effects of sin in the form of death and sickness. Sin in all its forms is seen as part of the kingdom of evil. The New Testament's concept of this relationship between sin and sickness can best be seen in Christ's healing of the man sick of the palsy (Mk 2:113). A man is sick. Christ forgives his sins. The Jews say this is blasphemy, for only God can forgive sins. Jesus answers this by healing the sick man. Jesus' response is conclusive only if he and the Jews agree that the man's sickness is closely related to sin. Otherwise the only other explanation would be that Jesus was giving a sign which overrode for its sheer wonder the scepticism of the Jews, and that it was just a mere coincidence that he healed the man, when, for instance, turning the sand into \Vater would have served even better. This interpretation is contrary to our knowledge of Christ's methods. Jesus' action shows his broad acceptance of the Old Testament belief in the close relation between sickness and sin. This rela-