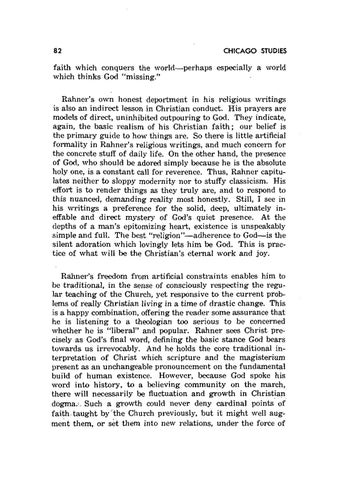 faith which conquers the world-perhaps especially a world which thinks God &quot;missing.&quot; Rahner&#39;s own honest deportment in his religious wl&quot;itings is also an indirect lesson in Christian conduct. His prayers are models of direct, uninhibited outpouring to God. They indicate, again, the basic realism of his Christian faith; our belief is the primary guide to how things are. So there is little artificial formality in Rahner&#39;s religious writings, and much concern for the concrete stuff of daily life. On the other hand, the presence of God, who should be adored simply because he is the absolute holy one, is a constant call for reverence. Thus, Rahner capitulates neither to sloppy modernity nor to stuffy classicism. His effort is to render things as they truly are, and to respond to this nuanced, demanding reality most honestly. Still, I see in his writings a preference for the solid, deep, ultimately ineffable and direct mystery of God&#39;s quiet presence. At the depths of a man&#39;s epitomizing heart, existence is unspeakably simple and full. The best &quot;religion&quot;-adherence to God-is the silent adoration which lovingly lets him be God. This is practice of what will be the Christian&#39;s eternal work and joy. Rahner&#39;s freedom from artificial constmints enables him to be traditional, in the sense of consciously respecting the regular teaching of the Church, yet responsive to the current problems of really Christian living in a time of drastic change. This is a happy combination, offering the reader some assurance that he is listening to a theologian too sel&quot;ious to be concerned whether he is &quot;liberal&quot; and popular. Rahner sees Christ precisely as God&#39;s final word, defining the basic stance God bears towards us irrevocably. And he holds the core traditional interpretation of Christ which scripture and the magisterium present as an unchangeable pronouncement on the fundamental build of human existence. However, because God spoke his word into history, to a believing community on the march, there will necessarily be fluctuation and growth in Christian dogma.â&amp;#x20AC;˘. Such a growth could never deny cardinal points of faith taught by Âˇ&#39;the Church previously, but it might well augmeilt them, or set them into new relations, under the force of