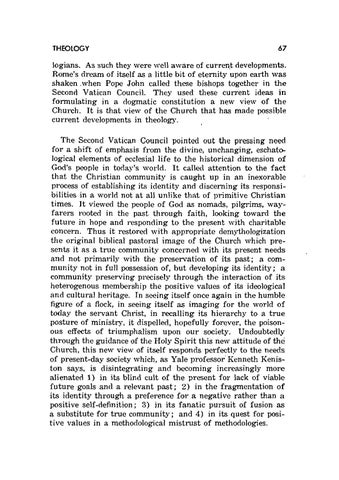 logians. As such they were well aware of current developments. Rome's dream of itself as a little bit of eternity upon earth was shaken .when Pope John called these bishops together in the Second Vatican Council. They used these cuJTent ideas in fonnulating in a dogmatic constitution a new view of the Church. It is that view of the Church that has made possible current developments in theology. The Second Vatican Council pointed out the pressing need for a shift of emphasis from the divine, unchanging, eschatological elements of ecclesial life to the historical dimension of God's people in today's world. It called attention to the fact that the Christian community is caught up in an inexorable process of establishing its identity and discerning its responsibilities in a world not at all unlike that of ])l;mitive Christian times. It viewed the people of God as nomads, pilgrims, wayfarers rootecl in the past through faith, looking toward the future in hope and tâ&#x20AC;˘esponding to the present with charitable concern. Thus it restored with appropdate demythologization the original biblical pastoral image of the Church which presents it as a true community concerned with its present needs and not primarily with the preservation of its past; a community not in full possession of, but developing its identity; a community preserving precisely through the interaction of its heterogenous membership the positive values of its ideological and cultural heritage. In seeing itself once again in the humble figure of a flock, in seeing itself as imaging for the world of today the servant Christ, in recalling its hierarchy to a true posture of ministry, it dispelled, hopefully forever, the poisonous effects of triumphalism upon our society. Undoubtedly through the guidance of the Holy Spirit this new attitude of the Church, this new view of itself responds perfectly to the needs of present-day society which, as Yale professorÂˇ Kenneth Keniston says, is disintegrating ann becoming increasingly more alienated 1) in its blind cult of the ptÂˇesent for lack of viable future goals and a relevant past; 2) in the fragmentation of its identity through a preference for a negative rather than a positive self-definition; 3) in its fanatic pursuit of fusion as a substitute for true community; and 4) in its quest for positive values in a methodological mistrust of methodologies.