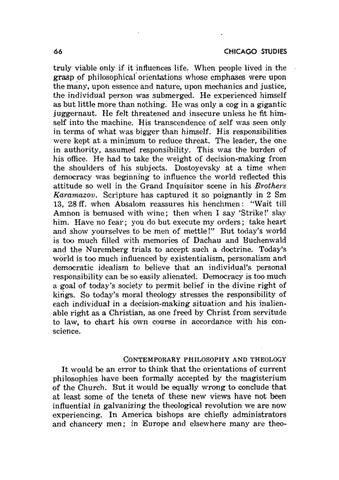 truly viable only if it influences life. When people lived in the grasp of philosophical&quot; orientations whose emphases were upon the many, upon essence and nature, upon mechanics and justice, the individual person was submerged. He experienced himself as but little more than nothing. He was only a cog in a gigantic juggernaut. He felt threatened and insecure unless he fit himself into the machine. His transcendence of self was seen only in terms of what was bigger than himself. His responsibilities were kept at a minimum to reduce threat. The leader, the one in authority, assumed responsibility. This was the burden of his office. He had to take the weight of decision-making from the shoulders of his subjects. Dostoyevsky at a time when democracy was beginning to influence the world reflected this attitude so well in the Grand Inquisitor scene in his Brothers Karamazov. Scripture has captured it so poignantly in 2 Sm 13, 28 ff. when Absalom reassures his henchmen: &quot;Wait till Amnon is bemused with wine; then when I say &#39;Strike!&#39; slay him. Have no fear; you do but execute my orders; take heart and show yourselves to be men of mettle!&quot; But today&#39;s world is too much filled with memories of Dachau and Buchenwald and the Nuremberg trials to accept such a doctrine. Today&#39;s woiÂˇld is too much influenced by existentialism, personalism anrl democratic idealism to believe that an individual&#39;s personal responsibility can be so easily alienated; Democracy is too much a goal of today&#39;s society to permit belief in the divine right of kings. So today&#39;s moral theology stresses the responsibility of each individual in a decision-making situation and his inalienable right as a Christian, as one freed by Christ from servitude to law, to chart his own course in accordance with his conscience.

It would be an etTor to think that the orientations of culTent philosophies have been formally accepted by the magisterium of the Church. But it would be equally wrong to conclude that at least some of the tenets of these new views have not been influential in galvanizing the theological revolution we are now experiencing. In America bishops are chiefly administrators and chancery men; in Europe and elsewhere many are theo-