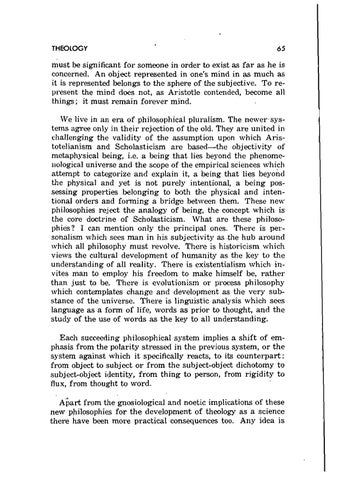 must be significant for someone in order to exist as far as he is concerned. An object represented in one's mind in as much as it is represented belongs to the sphere of the subjective. To represent the mind does not, as Aristotle contended, become all things; it must remain forever mind. We live in an era of philosophical pluralism. The newer-systems agree only in their rejection of the old. They are united in challenging the validity of the assumption upon which Aristotelianism and Scholasticism are based-the objectivity of metaphysical being, i.e. a being that lies beyond the phenomenological universe and the scope of the empirical sciences which attempt to categorize and explain it, a being that lies beyond the physical and yet is not purely intentional, a being possessing properties belonging to both the physical and intentional orders and f01ming a bridge between them. These new philosophies reject the analogy of being, the concept which is the core doctrine of Scholasticism. What are these philosophies? I can mention only the principal ones. There is personalism which sees man in his subjectivity as the hub around which all philosophy must revolve. There is historicism which views the cultural development of humanity as the key to the understanding of all reality. There is existentialism which invites man to employ his freedom to make himself be, rather than just to be. There is evolutionism or ptÂˇocess philosophy which contemplates change and development as the very substance of the universe. There is linguistic analysis which sees language as a form of life, words as prior to thought, and the study of the use of words as the key to all understanding. Each succeeding philosophical system implies a shift of emphasis from the polarity stressed in the previous system, or the system against which it specifically reacts, to its counterpart: from object to subject or from the subject-object dichotomy to subject-object identity, from thing to person, from rigidity to flux, from thought to word. Apart from the gnosiological and noetic implications of these new philosophies for the development of theology as a science there have been more practical consequences too. Any idea is