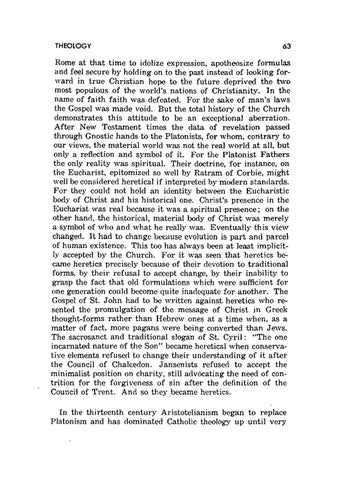 Rome at that time to idolize expression, apotheosize formulas and feel secure by holding on to the past instead of looking forward in true Christian hope to the future deprived the two most populous of the world's nations of Christianity. In the name of faith faith was defeated. For the sake of man's Jaws the Gospel was made void. But the total history of the Church demonstrates this attitude to be an exceptional aberration. After New Testament times the data of revelation passed through Gnostic hands to the Platonists, for whom, contrary to our views, the material world was not the real world at all, but only a reflection and symbol of it. For the Platonist Fathers the only reality was spiritual. Their doctrine, for instance, on the Eucharist, epitomized so well by Ratram of Corbie, might well be considered heretical if interpreted by modern standards. For they could not hold an identity between the Eucharistic body of Christ and his histodcal one. Christ's presence in the Eucharist was real because it was a spiritual presence; on the other hand, the historical, material body of Christ was merely a symbol of who and what he really was. Eventually this view changed. Tt had to change because evolution is part and parcel of human existence. This too has always been at least implicitly accepted by the Church. For it was seen that he1Âˇetics became heretics precisely because of their devotion to traditional forms, by their refusal to accept change, by their inability to grasp the fact that old formulations which were sufficient for one generation could become quite inadequate for another. The Gospel of St. John had to be written against heretics who resented the promulgation of the message of Christ in Greek thought-forms rather than Hebrew ones at a time when, as a matter of fact, more pagans were being converted than Jews. The sacrosanct and traditional slogan of St. Cyril: "The one incarnated nature of the Son" became heretical when conservative elements refused to change their understanding of it after the Council of Chalcedon. J ansenists refused to accept the minimalist position on charity, still advocating the need of contrition for the forgiveness of sin after the definition of the Council of Trent. And so they became heretics. In the thirteenth century Aristotelianism began to replace Platonism and has dominated Catholic theology up until very