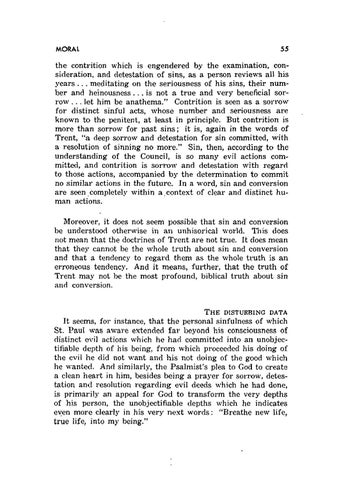 the contrition which is engendered by the examination, consideration, and detestation of sins, as a person reviews all his years ... meditating on the seriousness of his sins, their number and heinousness ... is not a true and very beneficial sorrow ... let him be anathema." Contrition is seen as a sorrow for distinct sinful acts, whose number and seriousness are known to the penitent, at least in principle. But contrition is more than sorrow for past sins; it is, again in the words of Trent, "a deep sorrow and detestation for sin committed, with a resolution of sinning no more." Sin, then, according to the understanding of the Council, is so many evil actions committed, and contrition is sorrow and detestation with regan! to those actions, accompanied by the determination to commit no similar actions in the future. In a word, sin and conversion are seen. completely within a. context of clear and distinct human actions. Moreover, it does not seem possible that sin and conversion be understood otherwise in an unhisorical world. This does not mean that the doctrines of Trent are not true. It does mean that they cannot be the whole truth about sin and conversion and that a tendency to regard them as the whole truth is an erroneous tendency. And it means, further, that the truth of Trent may not be the most profound, biblical truth about sin anil conversion.

It seems, for instance, that the personal sinfulness of which

St. Paul was aware extended far beyond his consciousness of clistinct evil actions which he had committed into an unobjectifiable depth of his being, from which proceeded his doing of the evil he did not want and his not doing of the good which he wanted. And similarly, the Psalmist's plea to God to create a clean heart in him, besides being a prayer for sorrow, detestation and resolution regarding evil deeds which he had done, is primarily an appeal for God to transform the very depths of his person, the unobjectifiable depths which he indicates even more clearly in his very next words: "Breathe new life, true life, into my being."