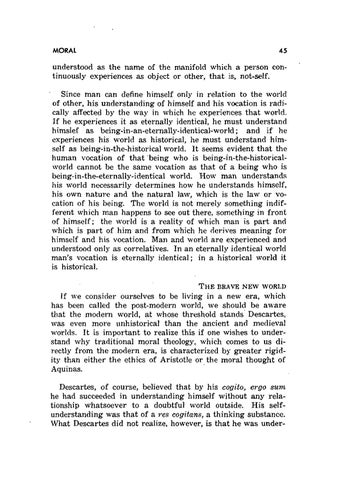 understood as the name of the manifold which a person continuously experiences as object or other, that is, not-self. Since man can define himself only in relation to the world of other, his understanding of himself and his vocation is radically affected by the way in which he experiences that world. If he experiences it as eternally identical, he must understand himslef as being-in-an-eternally-identical-world; and if he experiences his world as historical, he must understand himself as being-in-the-historical world. It seems evident that the human vocation of that ·being who is being-in-the-historicalworld cannot be the same vocation as that of a being who is being-in-the-eternally-identical world. How man understands his world necessarily determines how he understands himself, his own nature and the natural law, which is the law or vocation of his being. The world is not merely something indifferent which man happens to see out there, something in front of himself; the world is a reality of which man is part and which is part of him and from which he derives meaning for himself and his vocation. Man and world are experienced and understood only as correlatives. In an eternally identical world man&#39;s vocation is eternally identical; in a historical world it is historical. THE BRAVE NEW WORLD

If we consider ourselves to be living in a new era, which has been called the post-modern world, we should be aware that the modern world, at whose threshold stands· Descartes, was even more unhistorical than the ancient and medieval worlds. It is important to realize this if one wishes to understand why traditional moral theology, which comes to us directly from the modern era, is characterized by greater rigidity than either the ethics of Aristotle or the moral thought of Aquinas. Descartes, of course, believed that by his cogito, ergo sum he had succeeded in understanding himself without any relationship whatsoever to a doubtful world outside. His selfunderstanding was that of a •·es cogitans, a thinking substance. What Descartes did not realize, however, is that he was under-