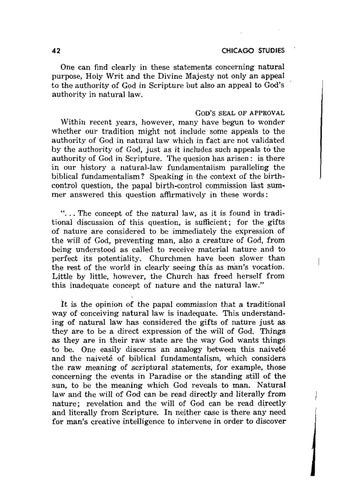 One can find clearly in these statements concerning natural purpose, Holy Writ and the Divine Majesty not only an appeal to the authority of God in Scripture but also an appeal to God's authority in natural law. GOD'S SEAL OF APPROVAL

Within recent years, however, many have begun to wonder whether our tradition might not include some appeals to the authority of God in natural law which in fact are not validated by the authority of God, just as it includes such appeals to the authority of God in Scripture. The quesion has arisen: is there in our history a natural-law fundamentalism paralleling the biblical fundamentalism? Speaking in the context of the birthcontrol question, the papal birth-control commission last summer answered this question affirmatively in these words: " ... The concept of the natural law, as it is found in traditional di.scussion of this question, is sufficient; for the gifts of nature are considered to be immediately the expression of the will of God, preventing man, also a creature of God, from being understood as called to receive material nature and to perfect its potentiality. Churchmen have been slower than the rest of the world in clearly seeing this as man's vocation. Little by little, however, the Church has freed herself from this inadequate concept of nature and the natural law." it is the opinion of the papal commission that a traditional way of conceiving natural law is inadequate. This understanding of natural law has considered the gifts of nature just as they are to be a direct expression of the will of God. Things as they are in their raw state are the way God wants things to be. One easily discerns an analogy between this naivete and the naivete of biblical fundamentalism, which considers the raw meaning of scriptural statements, for example, those concerning the events in Paradise or the standing still of the sun, to be the meaning which God reveals to man. Natural law and the will of God can be read directly and literally from nature; revelation and the will of God can be read directly and literally from Scripture. In neither case is there any need for man's creative intelligence to intervene in order to discover