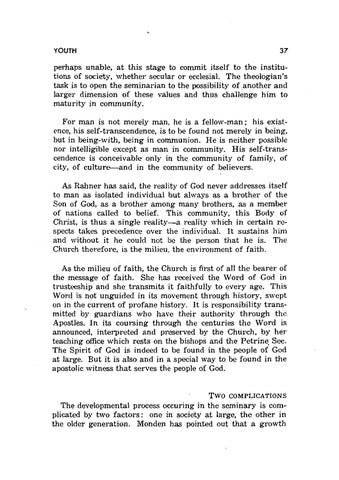 perhaps unable, at this stage to commit itself to the institutions of society, whether secular or ecclesial. The theologian&#39;s task is to open the seminarian to the possibility of another and larger dimension of these values and thus challenge him to maturity in community. For man is not merely man, he is a fellow-man; his existence, his self-transcendence, is to be found not merely in being, but in being-with, being in communion. He is neither possible nor intelligible except as man in community. His self-transcendence is conceivable only in the community of family, of city, of culture--and in the community of believers. As Rahner has said, the reality of God never addresses itself to man as isolated individual but always as a brother of the Son of God, as a brother among many brothers, as a member of nations called to belief. This community, this Body of Christ, is thus a single reality-a reality which in certain respects takes precedence over the individual. It sustains him and without it he could not be the person that he is. The Church therefore, is the milieu, the environment of faith. As the milieu of faith, the Church is first of all the bearer of the message of faith. She has received the Word of God in trusteeship and she transmits it faithfully to every age. This Word is not unguided in its movement through history, swept on in the current of profane history. It is responsibility transmitted by guardians who have their authority through the Apostles. In its coursing through the centuries the Word is announced, interpreted and preserved by the Church, by her teaching office which rests on the bishops and the Petrine See. The Spirit of God is indeed to be found in the people of God at large. But it is also and in a special way to be found in the apostolic witness that serves the people of God.

The developmental process occuring in the seminary is complicated by two factors: one in society at large, the other in the older generation. Monden has pointed out that a growth