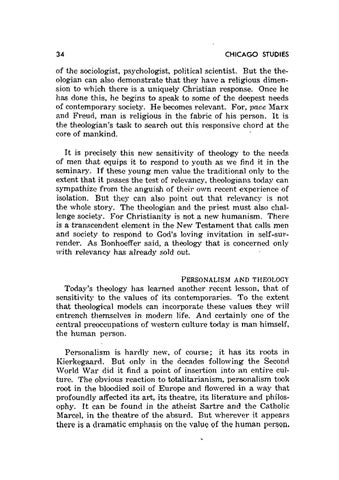 of the sociologist, psychologist, political scientist. But the theologian can also demonstrate that they have a religious dimension to which there is a uniquely Christian response. Once he has done this, he begins to speak to some of the deepest needs of contemporary society. He becomes relevant. For, pace Marx and Freud, man is religious in the fabric of his person. It is the theologian&#39;s task to search out this responsive chord at the core of mankind. It is precisely this new sensitivity of theology to the needs of men that equips it to respond to youth as we find it in the seminary. If these young men value the traditional only to the extent that it passes the test of relevancy, theologians today can sympathize from the anguish of their own recent experience of isolation. But they can also point out that relevancy is not the whole story. The theologian and the priest must also challenge society. For Christianity is not a new humanism. There is a transcendent element in the New Testament that calls men and society to respond to God&#39;s loving invitation in self-surrender. As Bonhoeffer said, a theology that is concerned only with relevancy has already sold out.

Today&#39;s theology has learned another recent lesson, that of sensitivity to the values of its contemporaries. To the extent that theological models can incorporate these values they will entrench themselves in modern life. And certainly one of the central preoccupations of western culture today is man himself, the human person. Personalism is hardly new, of course; it has its roots in Kierkegaard. But only in the decades following the Second World War did it find a point of insertion into an entire culture. The obvious reaction to totalitarianism, personalism took root in the bloodied soil of Europe and flowered .in a way that profoundly affected its art, its theatre, its literature and philosophy. It can be found in the atheist Sartre and the Catholic Marcel, in the theatre of the absurd. But wherever it appears there is a dramatic emphasis on the value of the human person.