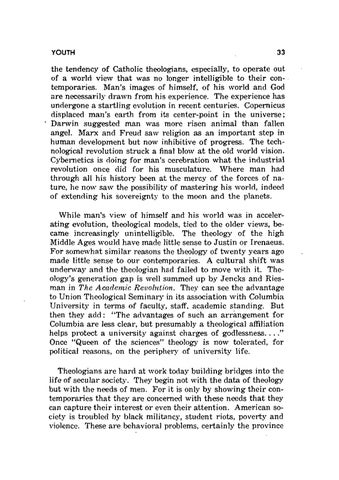 the tendency of Catholic theologians, especially, to operate out of a worlfl view that was no longer intelligible to their contemporaries. Man&#39;s images of himself, of his world and God are necessarily drawn from his experience. The experience has unrlergone a startling evolution in recent centuries. Copernicus rlisplaced man&#39;s earth from its center-point in the universe; Darwin suggesterl man was more risen animal than fallen angel. Marx and Freud saw religion as an important step in human development but now inhibitive of progress. The technological revolution struck a final blow at the old world vision. Cybernetics is doing for man&#39;s cerebration what the industrial revolution once &lt;lid for his musculature. Where man had through all his history been at the mercy of the forces of nature, he now saw the possibility of mastering his worlrl, indeerl of extenrling his sovereignty to the moon and the planets. While man&#39;s view of himself and his world was in accelerating evolution, theological models, tied to the older views, became increasingly unintelligible. The theology of the high Middle Ages would have made little sense to Justin or Irenaeus. For somewhat similar reasons the theology of twenty years ago made little sense to our contemporaries. A cultural shift was underway and the theologian had failed to move with it. Theology&#39;s generation gap is well summed up by Jencks and Riesman in The Academic Revolution. They can see the advantage to Union Theological Seminary in its association with Columbia University in terms of faculty, staff, academic standing. But then they add : &quot;The advantages of such an arrangement for Columbia are less clear, but presumably a theological affiliation helps protect a university against charges of godlessness .... &quot; Once &quot;Queen of the sciences&quot; theology is now tolerated, for political reasons, on the periphery of university life. Theologians are hare! at work today building bridges into the life of secular society. They begin not with the data of theology but with the needs of men. For it is only by showing their contemporaries that they are concerned with these needs that they can capture their interest or even their attention. American society is troubled by black militancy, student riots, poverty and violence. These are behavioral problems, certainly the province