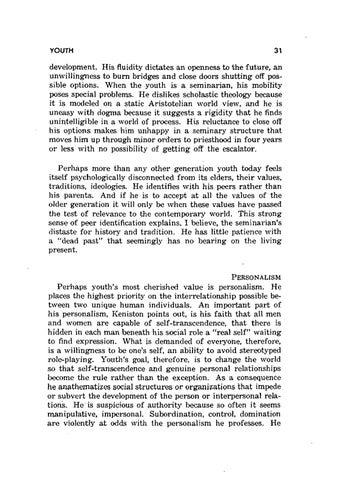 development. His fluidity dictates an openness to the future, an unwillingness to burn bridges and close doors shutting off possible options. When the youth is a seminarian, his mobility poses special problems. He dislikes scholastic theology because it is modeled on a static Aristotelian world view, and he is uneasy with dogma because it suggests a rigidity that he finds unintelligible in a world of process. His reluctance to close off his options makes him unhappy in a seminary structure that moves him up through minor orders to priesthood in four years or less with no possibility of getting off the escalator. Perhaps more than any other generation youth today feels itself psychologically disconnected from its elders, their values, traditions, ideologies. He identifies with his peers rather than his parents. And if he is to accept at all the values of the older generation it will only be when these values have passed the test of relevance to the contemporary world. This strong sense of peer identification explains, I believe, the seminarian's distaste for history and tradition. He has little patience with a "dead past" that seemingly has no bearing on the living present.

Perhaps youth's most cherished value is personalism. He places the highest priority on the interrelationship possible between two unique human individuals. An important part of his personalism, Keniston points out, is his faith that all men and women are capable of self-transcendence, that there is hidden in each man beneath his social role a "real self" waiting to find expression. What is demanded of everyone, therefore, is a willingness to be one's self, an ability to avoid stereotyped role-playing. Youth's goal, therefore, is to change the world so that self-transcendence and genuine personal relationships become the rule rather than the exception. As a consequence he anathematizes social structures or organizations that impede or subvert the development of the person or interpersonal relations. HeÂˇ is suspicious of authority because so often it seems manipulative, impersonal. Subordination, control, domination are violently at odds with the personalism he professes. He