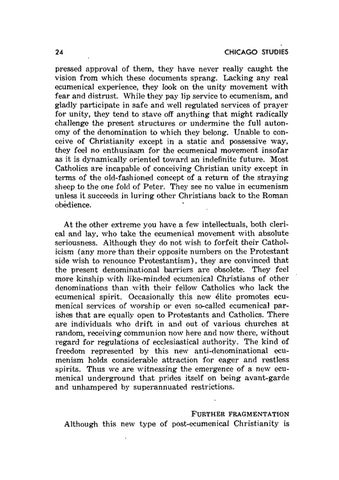 pressed approval of them, they have never really caught the vision from which these documents sprang. Lacking any real ecumenical experience, they look on the unity movement with fear and distrust. While they pay lip service to ecumenism, and gladly participate in safe and well regulated services of prayer for unity, they tend to stave off anything that might radically challenge the present structures or undermine the full autonomy of the denomination to which they belong. Unable to conceive of Christianity except in a static and possessive way, they feel no enthusiasm for the ecumenical movement insofar as it is dynamically oriented toward an indefinite future. Most Catholics are incapable of conceiving Christian unity except in terms of the old-fashioned concept of a return of the straying sheep to the one fold of Peter. They see no value in ecumenism unless it succeeds in luring other Christians back to the Roman obedience. At the other extreme you have a few intellectuals, both clerical and lay, who take the ecumenical movement with absolute seriousness. Although they do not wish to forfeit their Catholicism (any more than their opposite numbers on the Protestant side wish to renounce Protestantism), they are convinced that the present denominational barriers are obsolete. They feel more kinship with like-minded ecumenical Christians of other denominations than with their fellow Catholics who lack the ecumenical spirit. Occasionally this new elite promotes ecumenical services of worship or even so-called ecumenical parishes that are equally open to Protestants and Catholics. There are individuals who drift in and out of various churches at random, receiving communion now here and now there, without regard for regulations of ecclesiastical authority. The kind of freedom represented by this new anti-denominational ecumenism holds considerable attraction for eager and restless spitÂˇits. Thus we are witnessing the emergence of a new ecumenical underground that prides itself on being avant-garde and unhampered by superannuated restrictions. FURTHER FRAGMENTATION

Although this new type of post-ecumenical Christianity is