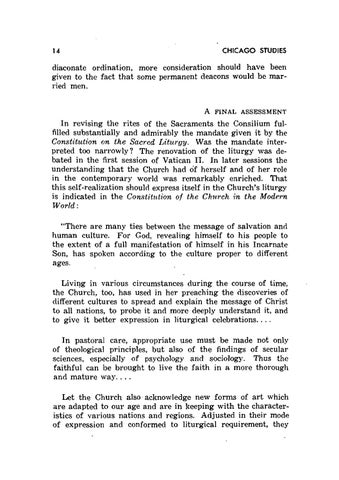 diaconate ordination, more consideration should have been given to the fact that some permanent deacons would be married men. A FINAL ASSESSMENT

In rev1smg the rites of the Sacraments the Consilium fulfilled substantially and admirably the mandate given it by the Constitution on the Sacred Liturgy. Was the mandate interpreted too narrowly? The renovation of the liturgy was debated in the first session of Vatican II. In later sessions the understanding that the Church had of herself and of her role in the contemporary world was remarkably enriched. That this self-realization should express itself in the Church's liturgy is indicated in the Constitution of the Church in the ModPrn World: "There are many ties between the message of salvation and human culture. For God, revealing himself to his people to the extent of a full manifestation of himself in his Incarnate Son, has spoken according to the culture proper to diffe1Âˇent ages. LiviJ!g in various circumstances during the course of time, the Church, too, has used in her preaching the discoveries of different cultures to spread and explain the message of Christ to all nations, to probe it and more deeply understand it, and to give it better expression in liturgical celebrations .... In pastoral care, appropriate use must be made not only of theological principles, but also of the findings of secular sciences, especially of psychology and sociology. Thus the faithful can be brought to live the faith in a more thorough and mature way.... Let the Church also acknowledge new forms of art which are adapted to our age and are in keeping with the characteristics of various nations and regions. Adjusted in their mode of expression and conformed to liturgical requirement, they