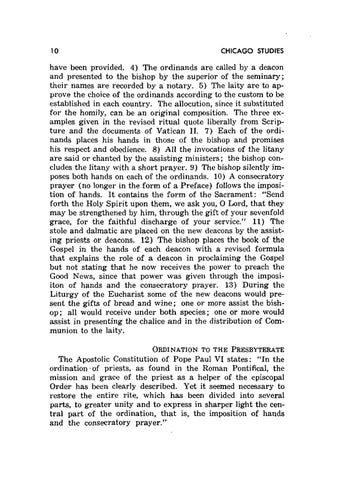 have been provided. 4) The ordinands are called by a deacon and presented to the bishop by the superior of the seminary; their names are recorded by a notary. 5) The laity are to appwve the choice of the ordinands according to the custom to be established in each country. The allocution, since it substituted for the homily, can be an original composition. The three examples given in the revised ritual quote liberally from Scripture and the documents of Vatican II. 7) Each of the ordinands places his hands in those of the bishop and promises his respect and obedience. 8) All the invocations of the litany are said or chanted by the assisting ministers; the bishop concludes the litany with a short prayer. 9) The bishop silently imposes both hands on each of the ordinands. 10) A consecratory prayer (no longer in the form of a Preface) follows the imposition of hands. It contains the form of the Sacrament: "Send forth the Holy Spirit upon them, we ask you, 0 Lord, that they may be strengthened by him, through the gift of your sevenfold grace, for the faithful discharge of your service." 11) The stole and dalmatic are placed on the new deacons by the assisting priests or deacons. 12) The bishop places the book of the Gospel in the hands of each deacon with a revised formula that explains the role of a deacon in proclaiming the Gospel but not stating that he now receives the power to preach the Good News, since that power was given through the imposiiton of hands and the consecratory prayer. 13) During the Liturgy of the Eucharist some of the new deacons would present the gifts of bread and wine; one or more assist the bishop; all would receive under both species; one or more would assist in presenting the chalice and in the distribution of Communion to the laity. ORDINATION TO THE PRESBYTERATE

The Apostolic Constitution of Pope Paul VI states: "In the ordinationÂˇ of priests, as found in the Roman Pontifical, the mission and grace of the priest as a helper of the episcopal Order has been clearly described. Yet it seemed necessary to restore the entire rite, which has been divided into several parts, to greater unity and to express in sharper light the central part of the ordination, that is, the imposition of hands and the consecratory prayer."