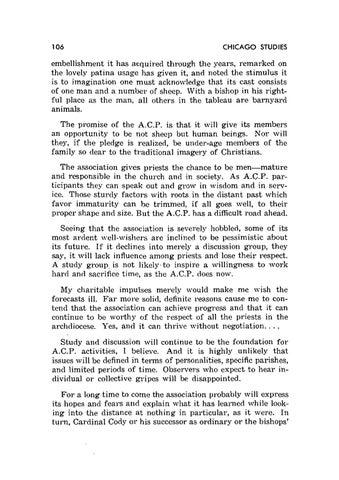 embellishment it has acquired through the years, remarked on the lovely patina usage has given it, and noted the stimulus it is to imagination one must acknowledge that its cast consists of one man and a number of sheep. With a bishop in his rightful place as the man, all others in the tableau are barnyard animals. The promise of the A.C.P. is that it will give its members an oppmiunity to be not sheep but human beings. Nor will they, if the pledge is realized, be under-age members of the family so dear to the traditional imagery of Christians. The association gives priests the chance to be men-mature and responsible in the church and in society. As A.C.P. participants they can speak out and grow in wisdom and in service. Those sturdy factors with roots in the distant past which favor immaturity can be trimmed, if all goes well, to their proper shape and size. But the A.C.P. has a difficult road ahead. Seeing that the association is severely hobbled, some of its most ardent well-wishers arc inclined to be pessimistic about its future. If it declines into merely a discussion group, they say, it will lack influence among priests and lose their respect. A study group. is not likelyÂˇ to inspire a willingness to work hard ami sacrifice time, as the A.C.P. does now. My charitable impulses merely would make me wish the forecasts ill. Far more solid, definite reasons cause me to contend that the association can achieve progress and that it can continue to be worthy of the respect of all the priests in the archdiocese. Yes, and it can thrive without negotiation .... Study and discussion will continue to be the foundation for A.C.P. activities, I believe. And it is highly unlikely that issues will be defined in terms of personalities, specific parishes, and limited periods of time. Observers who expect to hear individual or collective gripes will be disappointed. For a long time to come the association probably will express its hopes and fears and explain what it has learned while looking into the distance at nothing in particular, as it were. In turn, Cardinal Cody or his successor as ordinary or the bishops'