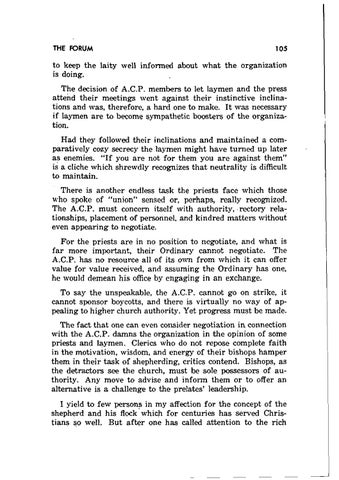 to keep the laity well infonned about what the organization is doing. The decision of A.C.P. members to let laymen and the press attend their meetings went against their instinctive inclinations and was, therefore, a hard one to make. It was necessary if laymen are to become sympathetic boosters of the organization. Had they followed their inclinations and maintained a comparatively cozy secrecy the laymen might have turned up later as enemies. &quot;If you are not for them you are against them&quot; is a cliche which shrewdly recognizes that neutrality is difficult to maintain. There is another endless task the priests face which those who spoke of &quot;union&quot; sensed or, perhaps, really recognized. The A.C.P. must concern itself with authority, . rectory rela~ tionships, placement of personnel, and kindred matters without even appearing to negotiate. For the priests are in no position to negotiate, and what is far more important, their Ordinary cannot negotiate. The A.C.P. has no resource all of its own from which it can offer value for value received, and assuming the Ordinary has one, he would demean his office by engaging in an exchange. To say the unspeakable, the A.C.P. cannot go on strike, it cannot sponsor boycotts, and there is virtually no way of appealing to higher church authority. Yet progress must be made. The fact that one can even consider negotiation in connection with the A.C.P. damns the organization in the opinion of some priests and laymen. Clerics who do not repose complete faith in the motivation, wisdom, and energy of their bishops hamper them in their task of shepherding, critics contend. Bishops, as the detractors see the church, must be sole possessors of authority. Any move to advise and inf01m them or to offer an alternative is a challenge to the prelates&#39; leadership. I yield to few persons in my affection for the concept of the shepherd and his flock&#39; which for centuries has served Christians so well. But after one has called attention to the rich