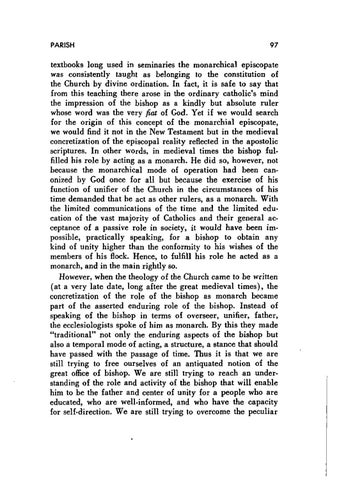 textbooks long used in seminaries the monarchical episcopate was consistently taught as belonging to the constitution of the Church by divine ordination. In fact, it is safe to say that from this teaching there arose in the ordinary catholic's mind the impression of the bishop as a kindly but absolute ruler whose word was the very fiat of God. Yet if we would search for the origin of this concept of the monarchial episcopate, we would find it not in the New Testament but in the medieval concretization of the episcopal reality reflected in the apostolic scriptures. In other words, in medieval times the bishop ful· filled his role by acting as a monarch. He did so, however, not because the monarchical mode of operation had been can· onized by God once for all but because the exercise of his function of unifier of the Church in the circumstances of his time demanded that he act as other rulers, as a monarch. With the limited communications of the time and the limited edu· cation of the vast majority of Catholics and their general ac· ceptance of a passive role in society, it would have been im· possible, practically speaking, for a bishop to obtain any kind of unity higher than the conformity to his wishes of the members of his flock. Hence, to fulfill his role he acted as a monarch, and in the main rightly so. However, when the theology of the Church came to be written (at a very late date, long after the great medieval times), the concretization of the role of the bishop as monarch became part of the asserted enduring role of the bishop. Instead of speaking of the bishop in terms of overseer, unifier, father, the ecclesiologists spoke of him as monarch. By this they made "traditional" not only the enduring aspects of the bishop but also a temporal mode of acting, a structure, a stance that should have passed with the passage of time. Thus it is that we are still trying to free ourselves of an antiquated notion of the great office of bishop. We are still trying to reach an under· standing of the role and activity of the bishop that will enable him to be the father and center of unity for a people who are educated, who are well-informed, and who have the capacity for self-direction. We are still trying to overcome the peculiar