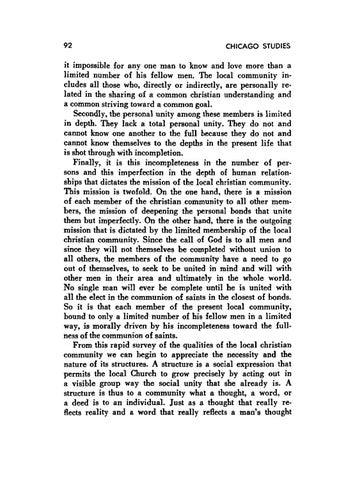 it impossible for any one man to know and love more than a limited number of his fellow men. The local community includes all those who, directly or indirectly, are personally related in the sharing of a common christian understanding and a common striving toward a common goal. Secondly, the personal unity among these members is limited in depth. They lack a total personal unity. They do not and cannot know one another to the full because they do not and cannot know themselves to the depths in the present life that is shot through with incompletion. Finally, it is this incompleteness in the number of persons and this imperfection in the depth of human relationships that dictates the mission of the local christian community. This mission is twofold. On the one hand, there is a mission of each member of the christian community to all other members, the mission of deepening the personal bonds that unite them but imperfectly. On the other hand, there is the outgoing mission that is dictated by the limited membership of the local christian community. Since the call of God is to all men and since they will not themselves be completed without union to all others, the members of the community have a need to go out of themselves, to seek to be united in mind and will with other men in their area and ultimately in the whole world. No single man will ever be complete until he is united with all the elect in the communion of saints in the closest of bonds. So it is that each member of the present local community, bound to only a limited number of his fellow men in a limited way, is morally driven by his incompleteness toward the fullness of the communion of saints. From this rapid survey of the qualities of the local christian community we can begin to appreciate the necessity and the nature of its structures. A structure is a social expression that permits the local Church to grow precisely by acting out in a visible group way the social unity that she already is. A structure is thus to a community what a thought, a word, or a deed is to an individual. Just as a thought that really reflects reality and a word that really reflects a man's thought