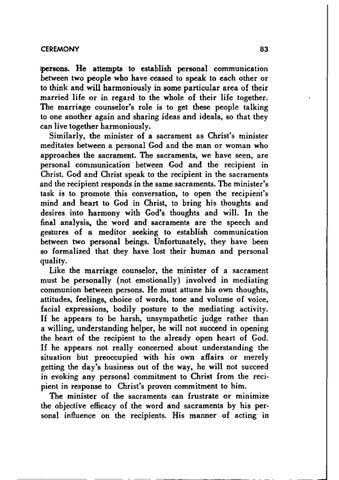 !persons. He attempts to estsblish personal communication between two people who have ceased to speak to each other or to think and will harmoniously in some particular area of their married life or in regard to the whole of their life together. The marriage counselor's role is to get these people talking to one another again and sharing ideas and ideals, so that they can live together harmoniously. Similarly, the minister of a sacrament as Christ's minister meditates between a personal God and the man or woman who approaches the sacrament. The sacraments, we have seen, are personal communication between God and the recipient in Christ. God and Christ speak to the recipient in the sacraments and the recipient responds in the same sacraments. The minister's task is to promote this conversation, to open the recipient's mind and heart to God in Christ, to bring his thoughts and desires into harmony with God's thoughts and will. In the final analysis, the word and sacraments are the speech and gestures of a meditor seeking to establish communication between two personal beings. Unfortunately, they have been so formalized that they have lost their human and personal quality. Like the marriage counselor, the minister of a sacrament must be personally (not emotionally) involved in mediating communion between persons. He must attune his own thoughts, attitudes, feelings, choice of words, tone and volume of voice, facial expressions, bodily posture to the mediating activity. If he appears to be harsh, unsympathetic judge rather than a willing, understanding helper, he will not succeed in opening the heart of the recipient to the already open heart of God. If he appears not really concerned about understanding the situation but preoccupied with his own affairs or merely getting the day's business out of the way, he will not succeed in evoking any personal commitment to Christ from the reciÂˇ pient in response to Christ's proven commitment to him. The minister of the sacraments can frustrate or minimize the objective efficacy of the word and sacraments by his perÂˇ sonal influence on the recipients. His manner of acting in