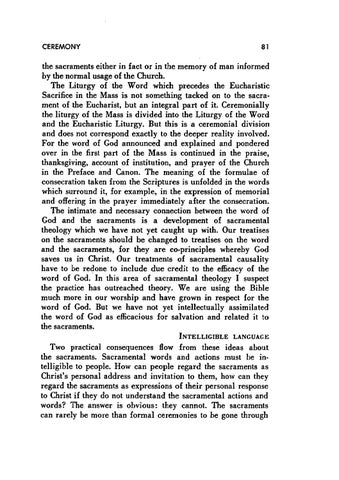 the sacraments either in fact or in the memory of man informed by the normal usage of the Church. The Liturgy of the Word which precedes the Eucharistic Sacrifice in the Mass is not something tacked on to the sacraÂˇ ment of the Eucharist, but an integral part of it. Ceremonially the liturgy of the Mass is divided into the Liturgy of the Word and the Eucharistic Liturgy. But this is a ceremonial division and does not correspond exactly to the deeper reality involved. For the word of God announced and explained and pondered over in the first part of the Mass is continued in the praise, thanksgiving, account of institution, and prayer of the Church in the Preface and Canon. The meaning of the formulae of consecration taken from the Scriptures is unfolded in the words which surround it, for example, in the expression of memorial and offering in the prayer immediately after the consecration. The intimate and necessary connection between the word of God and the sacraments is a development of sacramental theology which we have not yet caught up with. Our treatises on the sacraments should be changed to treatises on the word and the sacraments, for they are co-principles whereby God saves us in Christ. Our treatments of sacramental causality have to be redone to include due credit to the efficacy of the word of God. In this area of sacramental theology I suspect the practice has outreached theory. We are using the Bible much more in our worship and have grown in respect for the word of God. But we have not yet intellectually assimilated the word of God as efficacious for salvation and related it to the sacraments. INTELLIGIBLE LANGUAGE